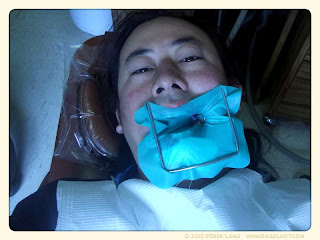 My dentist was convinced that to alleviate my toothache I had to get a root canal. It would be a few hundred bucks (a few hundred bucks I don't have). To be able to eat solid food again without pain would be a good thing. There were also the waves of pain that would come and go without me doing much of anything. It would be nice if that went away as well. I took a cash advance out on my mastercard. Not the most financially sound thing to do but I figured I could rerpair myself then concentrate on finding a job.

It took an hour and a half of what felt like a giant elastic band around my frozen mouth. The only real pain was the needle going into multiple places in my gums. I hate needles. The needle was delivering some stuff that would freeze my mouth. It did. I couldn't feel anything after a few minutes. A jack hammer could have been in my mouth, I don't think I would have felt it. At least not on my jaw. 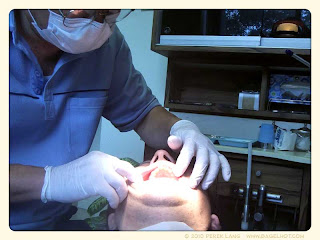 Aiming a camera while this is happening to you is not as easy as it might look.

My vision was the light and the ceiling. I could see little else. I'd catch a glimpse of things like the drill and that water sucky thing but I couldn't see what was actually happening. My dentist could have been making a bird fountain beneath my chin for all I knew.

So between the drilling and sucking of water I leaned up and got my camera (my dentist is good that way) and started taking photos. I made sure the flash was off. After all you don't want the guy with the power tool in your mouth to be blinded. This seems pretty logically to me.

After the operation I went home to sleep it off. When I woke up my mouth felt the same. The same as before I went to the dentist. Pain waves shooting through my jaw. Ugh. $600 poorer with no results. It was akin to taking a laptop in and not getting it fixed only there's the added fact that it's you and it's getting in the way of eating.

I'll have to see how I am tomorrow and if still in pain which I suspect I will be, I'll have to figure out a plan B. 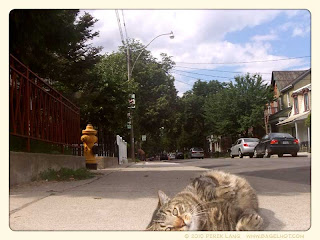 On the way home I saw stubby. I figured a cute cat photo would be good to get your mind off photos that might scare you. In reality though my dentist was great. There was no pain involved (other than the mentioned needle). Now I just have to wait and see.
Posted by BagelHot at 2:00 PM