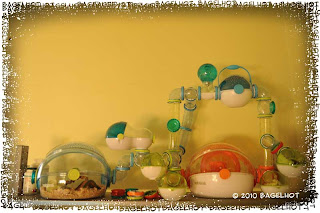 According to the hamster book1, hamsters should have a bunch of things they can do to prevent boredom and becoming irritable. I looked at my existing hamster habitrail set up and noticed that the main pod, the largest one, had a hamster wheel that took up most of the space.

While the hamster seems to like using the wheel I wondered if it needed more space to move around. If I was stuck in a single room I thought I'd get bored. Using that logic I ended up going to the pet store and picking up a blue OVO2 home for $30. It was the same price as the maze but came with accessories (water bottle, hamster wheel, food dish, and climbing thing). The maze pod and the home pod are the same size pods. The maze pod comes with a cardboard maze that the hamster can run around in. 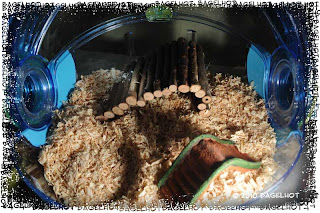 The blue pod set up.

I also picked up an edible bridge and a bunch of apple twigs. Hamsters need to chew on things to wear down the constantly growing teeth of theirs (also in the book1).

While pouring pine shavings into the pod a large chunk fell out of the bag. It was like winning the pine lottery. I wasn't really sure what to do with it. Keep it in the pad so Captain could gnaw on it or leave it out as it would take up space? I left it out. 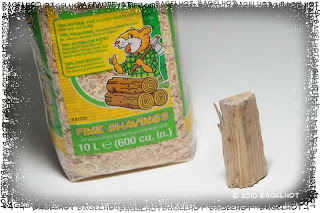 The next thing to look into would be feeding the hamster protein. How and what?


1 "Hamsters" by Peter Fritzsche
2 OVO is the new generation habitrail that looks like spheres or ovals.
Posted by BagelHot at 10:00 AM

Man, that looks awfully claustrophobic. I guess hamsters aren't bothered by that sort of thing, but I'm go insane in that within a few minutes...

I wonder how you can say that when you live in your apartment without venturing outside.

Hey, who invited you to the photo walk last weekend?... and who went home instead of watching a film screening I invited you to? (Bastard...)

Chris loved the film, and we both thought you would have really enjoyed it.