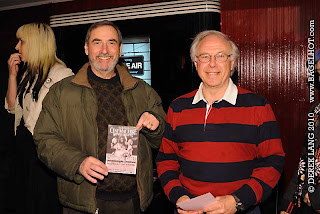 There was a screening of Cannibal Girls (1973) at the Bloor Theatre tonight. The two "surprise" guests were the two Allans from the movie. They played the first two victims.

The movie was pitched to me as a movie with Eugene Levy and Andrea Martin, a campy Canadian comedy directed by Ivan Reitman. I found out in the theatre that it was a horror movie that resembled Auntie Lee's Meat Pies... or vice versa since the Canadian movie was made 19 years earlier.

While I'm not really into the horror genre I did find the film entertaining. Probably had more to do with the people that I saw the movie with than the movie by itself.
Posted by BagelHot at 9:00 PM