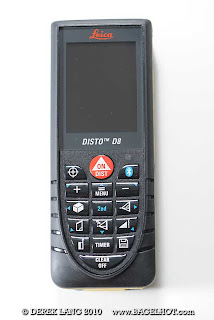 I've been wanting to get one of these for a while. The last job where I needed to measure stuff I had to talk 5 meters through knee deep snow, battle the winds trying to use my trusty tape measure. Improvising by packing one end of the tape measure under a block of ice didn't help. The wind was too strong. Eventually I got a distance and it probably wasn't that accurate. I also permanently bent the metal tape thanks to it folding in on itself.

To measure the height of the camera which was about 20 feet up on a crane was another story. I used the shadows around and using similar triangles approximated how high the camera was. The shot was done quickly and the shadow moved. Didn't give me enough time to have accurate markers let alone take an accurate reading.

Enter the Disto. While they're handy, they're also expensive. It's a tough to justify if you're not using it every day. To be honest I'd rather buy another lens. Borrowing the device off someone else is possible if they're not using it, that is provided someone else has one. 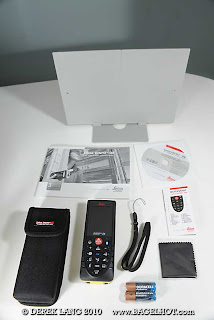 What you get with the Disto D8

I bit the bullet so to speak and picked up the current model, the Disto D8. It fires a laser that slices through the air and is accurate over a 30 meter range by plus or minus one millimeter. Supposedly it can measure up to 650m if on a tripod.

It's cool. You just point the laser (watch people's eyes though) at what you want to measure the distance to and viola your measurement is displayed on the screen (in metric or imperial). "What was that you say? It's too sunny out and you can't see the little red dot of the laser?" No problem, there's a built in camera that can show you on the screen what you're pointing at!

If that's not geeky enough, there's some simple trig functions in the unit that allow for other measurements pretty easily. Like the height of that window way up on the fifth floor. Just zap the top of the window and the bottom of the window. Using the built in 360 angle locater and the distance it'll calculate the height for you. You can then transfer the data using the built in blue tooth option.

Crazy nerdy fun... and it works off two non-proprietary AA batteries!!
Posted by BagelHot at 12:20 AM