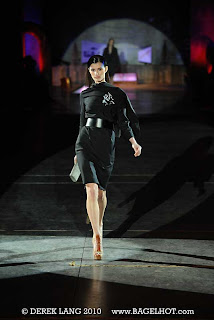 The Greta Constantine catwalk tonight was a success. At least to this photographer. The designers, Kirk and Stephen, still coming up with some great designs to wear. This is the second catwalk I've photographed of theirs and the second one I've been impressed with.

For more on the Greta Constantine line click here.

I have to give these guys props for doing their catwalk independent of Toronto Fashion week. Getting a nice venue and having good lighting isn't something that comes cheap. But perhaps not having any association with Toronto Fashion week is a good thing.

Generally only a handful of designers get press during fashion week. It's generally the same designers year after year. The newer designers get nothing in terms of media coverage. For a designer that's a lot of money to shell out for 15 minutes of runway time. Toronto Fashion week was late this year as well. Way after buyers would have bought anything for the fall/winter season.
Posted by BagelHot at 7:45 PM