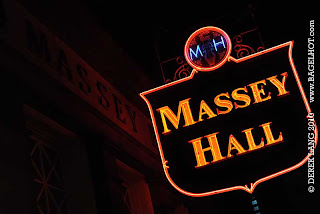 I got a gig tonight to photograph Jamie Cullum playing at Massey Hall. As a general rule photographers are usually only allowed to photograph during the first three numbers. After that your time is up and you're being led out of the venue. There are the odd exceptions, photographing wakestock, bands in small venues, bands in big venues. Now that I think about it why is there a three song rule anywhere?

It makes sense if the photographers are in the way of the paying audience. That wouldn't go over well. Even the clicking of the camera shutter can be annoying. So okay three songs and you're out. Seems reasonable. 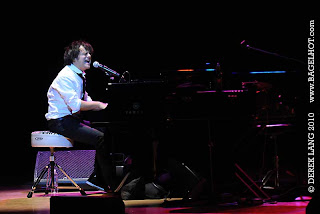 We waited outside off behind the stage somewhere. There were three of us, photographers shooting for various wire services, newspapers. Some other act was just finishing up and our escort was waiting with us. We were given stickers as badges identifying us as press.

Having not shot at this venue before the escort asked if I was carrying a zoom lens. Usually I shoot with a 70-200mm but because I was given a head's up by Dominic, the photographer I was standing in for I brought my lens doubler. This made my range go from 140-400mm. The disadvantage is that I would lose two stops going from 2.8 to 5.6. I would have to have the shutter open longer to get a proper exposure, meaning that I couldn't shoot any quick motion without blur.

There was an intermission and we were let in, following the escort, to the back row on the main floor. Wow, we were really far from the stage. The photo above was shot with a 400mm lens on a monopod. I would have liked to have gotten closer as this still feels far away. It was.

I lost count of the number of songs and by the end of the third song found myself juggling gear on the way out toward the exit. I rearranged everything into my camera bag and left thinking I had forgotten something.
Posted by BagelHot at 8:30 PM