On the Road to the Rainbow Rink

Got up at 6am this morning. My hour long limited amount of sleep was made even shorter by hearing people downstairs singing to rock band. Specifically the song “Lean on me” with the main vocals being thrown around by Paul Bearer. His voice resonated around the upper floors of the house with the help of backup vocals from a bunch of the other sloshed and musically unidentifiable guests.

Surprisingly I actually felt like I had good sleep. The bed helped. For someone that slept from 5am to 6am, I was alert, could see clearly, and had a schedule to adhere to. The next step was to see if Rebel Rock-it would wake up. This task was given to Charlotte Bruise-a-lot who was still awake, she offered to go into the room where Rebel was sleeping to see if she could get her out of bed.

Rebel and I had to make the journey back to Toronto and double back to go to Buffalo. Why? Because I left my passport at home and because Rebel left her skates and gear in Toronto not knowing she was going to skate in with the Skids. Personally, I should glue the passport to me for future cross border excursions.

Everything went like clock work. Rebel woke up, we said our good byes, got into a cab, and were waiting on the front steps of Jett Girl and Perky’s house in record time. This is where we would meet up with some of the Montreal roller girls who were going back to Montreal via Toronto and catch a lift. We were early.

We didn’t want to wake them up before the assigned time of meeting so we sat on the porch and waited. 20 minutes went by before we heard their alarm go off. Then there was a bit of mumbling, then nothing, then groggy mummers of tired skaters. At precisely 6:45am, the time we agreed to meet, I knocked on the door. They were surprised that we made it on time. Actually, I think they were surprised that we made it at all. 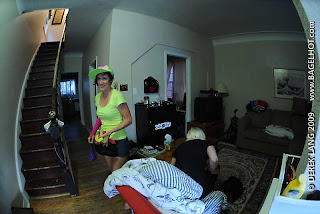 Wrath Poutine amazed that we showed up... and on time. 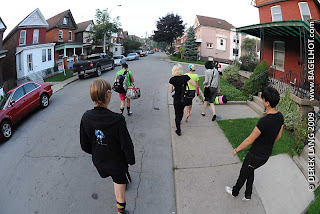 Walking toward the car 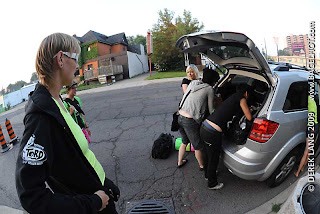 Making room for the Toronto travellers 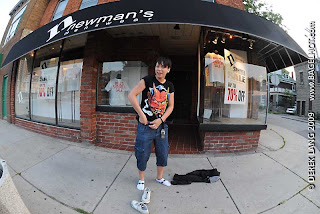 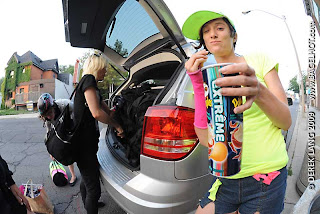 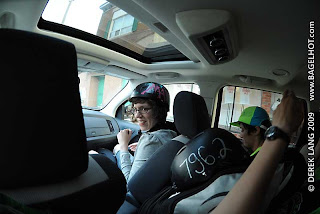 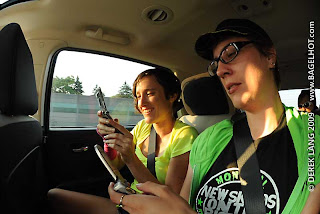 Making calls trying to track down clothing and skate gear

Wrath Poutine, had realized she left her clothing and skate gear in a trunk of a car which had made it’s way to Toronto. What luck. This would be another reason for the Montreal girls to make a small detour into Toronto other than to just drop us off. 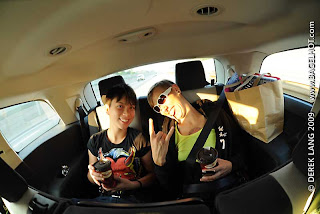 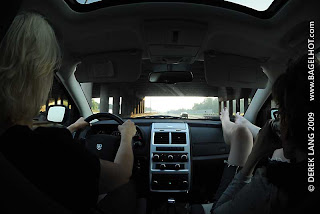 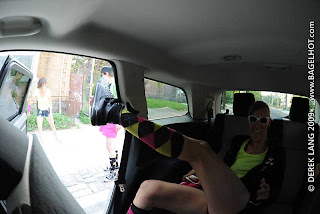 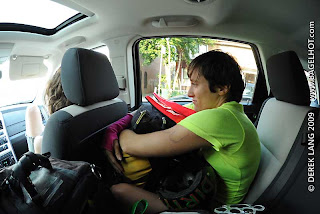 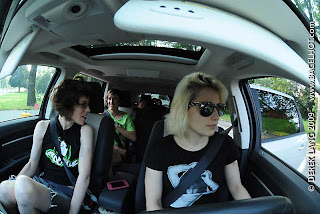 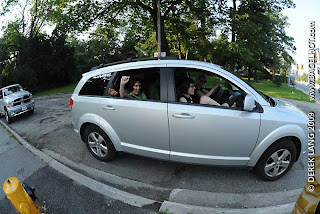 After dropping off Rebel in her neighbourhood and picking up Poutine’s skates and clothing, I was driven over to Castlefrank station (in Toronto), the TTC stop just before the Don Valley Parkway on ramp and the route toward Montreal. It was 8:30am. It was Sunday. The doors of the station were locked. The trains were not operating until 9:00am on Sunday. Whoops. A small oversight.

The alternative to the train were the two buses that were going east across the street. D'oh! I just missed them. I ended up hailing a cab.

15 minutes and eleven dollars later I was at home. I packed stuff for the trip to the States, my passport, GPS, extra camera batteries, and my zip lock bag of American money. It would be a few hours before Rebel dropped by with her pickup truck so I took a nap.

At 12:30pm, I woke up to text directions to the house so Rebel could meet me. At 1pm she arrived with the truck. 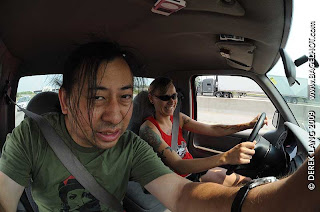 The trip to the rink had only two hiccups. This first being pulled over by the border guard. He told us “It’s your lucky day.”. I wonder if he thought that comment was funny? I also wondered how many people he would use that line on for the rest of the day. We spent about 20 minutes in a waiting room while they were outside checking the truck. They came in and let us go. Overall it wasn't that bad. 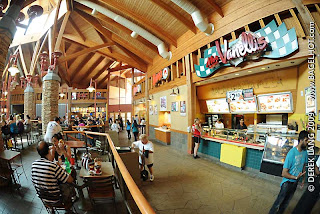 Food stop on our way to Buffalo 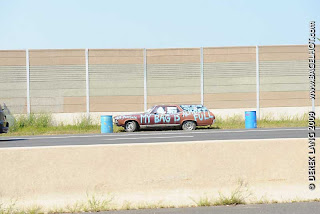 Some car on the side of the highway

With the help from Tush and a few cell phone texts we figured out my mistake and arrived at the Rainbow Rink at 5:15pm. Fifteen minutes before the doors opened to the public. 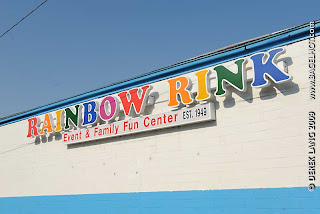 The Rainbow Rink in North Tonawanda (not Buffalo) 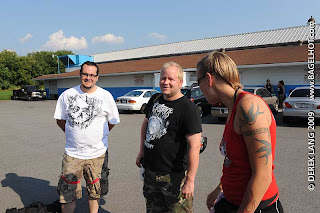 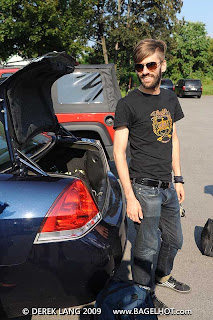 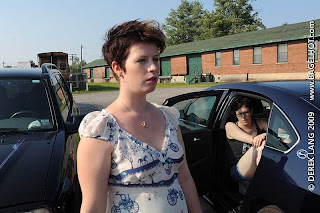 1 FRAN - a name given to my GPS by Ivy Rupted. I came up with the acronym "Find Restaurants And Navigate" later.
Posted by BagelHot at 6:00 AM