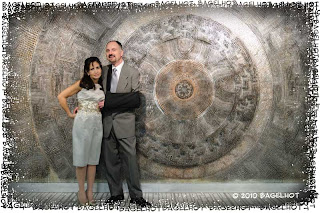 My friend Mark gets married at city hall.

As a wedding gift I went to city hall to take some quick photos of Mark getting married. He's a friend of mine that also works the 24 frame playback gigs.

One wouldn't think there's much to photograph in a government building other than cubicles wrapped in the awful glow of florescent light but in the "new" city hall (Toronto has two, referred to the "new" and the "old" city hall) there's a piece of art work that's made out of nails (see photo above). It provided an interesting background for the newlyweds.
Posted by BagelHot at 7:41 PM