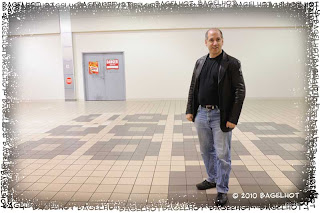 Larry in a Scarborough mall.

While I still had the car rental from yesterday's dance shoot and derby bout I figured I'd maximize the car rental by going shopping for food and stuff that seemed to be too big to carry while on foot. Even with my errands of running around I still would have the car for a few extra hours. It wasn't due back until later on in the evening. I called Laer to see if he needed to get anything.

Our first stop was to drop off a disc to Emmanuel. Laer was looking for some washers and parts for repairing stuff so the next stop was the Home Depot at Gerrard square. From there we drove up to Congee Queen for lunch, then headed over to the Golden Mile.

For the outside the Golden Mile seemed small and there was parking. That should have been our first clue. Available parking. Heck Gerrard Square parking was pretty full and Gerrard Square is one of those malls bordering on being a ghost mall.

Inside the Golden Mile it looked like something you might find in the neglected part of Detroit. Boarded up shops and a lot of room with no one in it. Zellers, one of the anchor stores, was no longer there. It was pretty depressing. 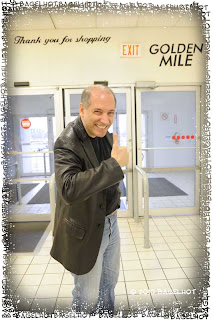 Larry and the Golden Mile.

Depressing but for some reason we couldn't stop making jokes at the Mall's expense, "Golden mile? Mile of what? That sounds disgusting." An image of elderly people with poorly working bladders waiting in line came to mind. "A whole mile of them" and other images which were probably more stupendous than the first.

We hit the road and looked around for other stores. I started out looking to buy socks but instead bought a Lego set on sale. It was after hitting about 4 toys R us shops that Laer spotted the giant Lego train set and it was on sale! I had plans for this to possibly make the hamster's life more exciting. My brain works in really odd ways at times when it's trying to justify a purchase. It would be my early Christmas gift to myself. 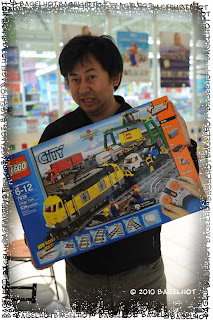 Our last stop was at a No Frills where we picked up some food.
Posted by BagelHot at 10:30 AM