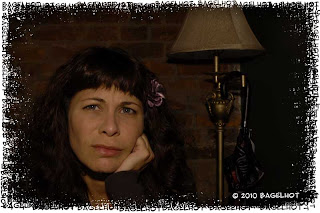 My friend Melanie is a portrait photographer in Hamilton. While she has studio gear and space, she doesn't have a portable flash for her camera. With a wedding gig on the near horizon Melanie wanted to know if I could lend her one of my SB-800s (Nikon Speedlight, aka flash for Nikon camera).

I figured I'd lend her one a few days before the wedding. It would allow her to experiment with it before the actual day of shooting. As a general rule for photographers. You should always test the gear before trying it out in the field. If something doesn't work you can find out why that is and minimize the "screw ups" or quickly adjust on the day should any curve ball be thrown at you. 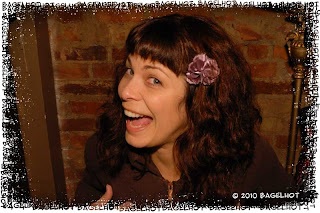 We ate at the Ship. A relatively new restaurant that opened across the street from the Plucker. They had seafood poutine. SEAFOOD poutine. I had to type that twice as it was really, really, amazingly good. SEAFOOD poutine, french fries with clam chowder and crab on it. Holy Moly was it tasty and that was just for appetizers. 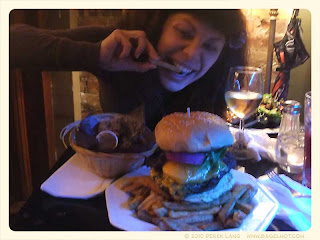 We also shared some gator nuggets (with real alligator) and I had a very large hamburger (see photo). By the end of our visit I was stuffed. Wheel barrel stuffed (ie. I would need a wheel barrel to get out of the restaurant). I'm not sure who came up with that saying or where the need for a wheel barrel specifically came from but the statement seems a bit old and outdated. I suppose someone should update that with a robot or some kind of technology from at least the year 2000.

I think this would be a great thing to have in the trunk of your car. You could have a remote control or a "I've eaten way too much" device (kind of like those medic alert bracelets, not really fashionable but functional) and with a push of a button this robot would be activated to bring you back to your car or home.
Posted by BagelHot at 7:00 PM