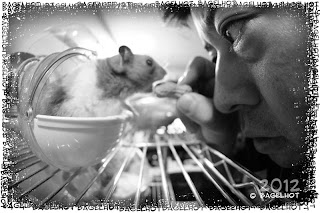 Hamsters are on sale! "Hey, that's cool I always wanted to get a Hamster as a pet." Maybe because they eat and sleep all day. I could relate to that. And at $5, the only pet less expensive would be a pet fish or maybe a worm (more on that experiment here).

Of course once you add the food, the cage, the total racked up to about $200.00, Then with additional add ons, treats, more food, some hamster toys, shelving, bedding, and a hamster fluff supply over two and a half years the total increases to about $600. Then there was the operation add another $1200. Bringing us to a grand total of $1800, sorry $1805.

When Captain Hill had the tumor I thought about letting her go in a park, crawling off into the sunset. $1200 is a lot of money. I had been paid just then so I had the money and seeing the poor thing trying to crawl through tubes was sad. I had gotten attached to the thing, dammit.

Captain Hill made a full recovery from the surgery in less than a day. That was quite good news and she has been crawling around since and eating and sleeping.

Today I noticed she was leaving a trail of blood. I did some research online. It could be cysts developing in the ovaries. This is common in female hamsters that haven't produced off spring. It could also be a urinary infection or a vaginal discharge.

The pet doctor isn't open until monday so I can't do anything until then. I can only hope the bleeding stops or if it doesn't that my cheque comes in so I can afford to take her to the vet.
Posted by BagelHot at 9:00 AM