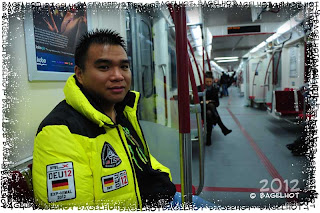 James on subway after seeing Looper

I finally got to see Looper. I was half surprised it was still in the theatres. I recall seeing it listed in the rep cinemas, the theatres where the admission is less expensive and the seats are generally more lumpy. The nice thing about the rep cinema is that it has a living room like quality. Perhaps from being independently owned.

My review of Looper without spoiling the story is that it was a good solid story. No plot holes, no characters acting dumb (or out of character), good acting. Also and most importantly at this time and age of movies for stupid people. The trailer doesn't give away the best parts of the movie but shows you enough to want to see it.

It was no Lawrence of Arabia but after seeing the last Bond movie Skyfall it was quite an improvement. I am perplexed at why Skyfall has been getting such great reviews. Did the reviewers only watch the first 10 minutes of the movie? How can it be the "Best Bond ever"? While it had a great concept for a movie after the opening credit sequence it just start falling apart. Was this a comment that was made by the asshats at Time magazine that thought Cloud Atlas was the worst movie in all of 2012? 2012, The same year that released Piranha 3DD? Who are these critics? Stupid jerks.

I don't know why this gets me all worked up.