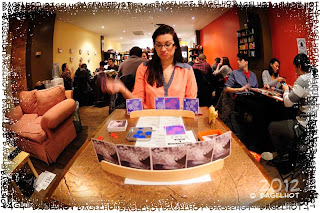 There's this place on Bloor just west of Bathurst called Snakes and Lattes. It could be considered a coffee shop which it technically is (hence the lattes part of the title). The spin is that there are board games available to play. You and your friends get a table, a server comes by with a menu, and offers a selection of games that can be played. You can choose something from the shelf but if you're unsure you can not only ask the server for a recommendation but you can also have them teach you how to play.  The cost is $5 per player.

In the world of electronic doodads and interactivity (without actually interacting with a person in real life) this games cafe is a nice change. You get to play an assortment of games, ones where you compete with one another and ones where you can actually play together for a common goal.

There are advantages of places like these in that A) you don't actually have to own the board game which might take up space in your apartment. B) your apartment is small, a disaster zone, C) you want to eat snacks or drink something being served to you (yes, this is always nice).

I had walked by this place a couple of times wondering what it was.  Since I don't drink coffee there was no real incentive to go in. Usually when I walked by the place I had another place I was on my way to so again not a lot of time to explore.  It was actually my friend Diane that offered it up as a suggested place to spend some time.  She was in town visiting her grand mother and had some time in Toronto before going back to London.

We were introduced to a card game called Hanabi.  It's a cooperative game which requires memory skills.  The game is simple once you learn it and lasts for about 30 minutes to an hour.  It was enough time to have a sandwich and a half bowl of nuts.

I'll have to visit again.
Posted by BagelHot at 6:30 PM