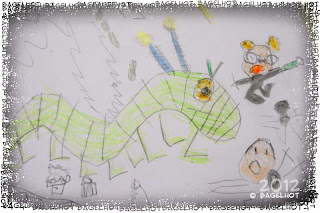 A masterpiece of art and distraction

My hours are still pretty messed up. I woke up pretty late and spent the day installing C# on my NetBook. It shouldn't have taken the whole day but a lot of the time was used up looking for a 750 meg CDrom to burn an ISO image to. That led to looking through a few bins of computer stuff which led to reminiscing on objects like the magic 8 ball and derby programs that were stored along with random cables and installation disks.

At 18:30 I got an invite to meet for dinner with William and Irmena.

As with any friends that have kids I have found that you spend a lot of time talking and interacting with the kids. Equal to or more so than the amount of time you get to talk to your friends. Especially if the kids are brought up to be social. My parents probably loved me as a child, I stayed in my room programming my apple ][+ and didn't really like talking to people because I was "shy". William and Irmena's children would be classified and social or to a single person 'high maintenance', at least from an interacting point of view.

The main course was a tasty Beef stew and after dinner that's when the barrage of the kids began. Asha grilled me with music flash cards and Finn showed off his drawing talents in a sketch book, a large sketch book. I noticed the parents had magically disappeared and I was stuck with the offspring.

Actually kids take up a lot of energy, a lot of energy. If you're a parent you probably know this. Also as a parent after having the first child you're probably already good at keeping the kids occupied so they don't completely drive you nuts. I am completely enamoured with people that have these skills. I think there should be a book on this for single people, people like me.

One of the techniques is to invite friends that are single to come hang out with you. Entice them to dinner. The more yummy the dinner the better. Then, when they are filled with food and the blood from their brain is being used to digest said food, when their state is between lethargic and fast asleep that's when you release the kids.

As a tactful friend it is impolite to tell the kids "go away" for no reason plus just having eaten your friends out of house and home there's a tinge of guilt that makes you want to interact with the kids a little. Get and little, give a little and all that.

Tonight I figured out that if you ask a kid to draw something that will distract said child from interacting with you, freeing you up to talk to the parents (if they are around). Also never request something simple (eg. Draw a pig). You want something that will suck up as much time as possible before the child has to go to bed. It's not a coincidence that kids are told to go to bed early (8pm). It gives parents a few hours to themselves to collect their wits. Drawing a pig would take no time at all. You need something that will take time and something you can add on to if the child you're requesting this from is lazy.

It is better to request of the child to draw some kind of scene. (eg. Draw a giant caterpillar attacking a city). Not only does this take longer to draw something this epic but it allows the child to explore their creative side. They get to draw the animal but it's also up to them as to how the animal will interact with the city. Stomping, laser eyes, lighting bolts from antennae, chomping, releasing a deadly virus? They might even add tanks, police cars, ambulances, and screaming victims if you're lucky.

The results are pretty great. It's a win-win. The kid creates a masterpiece and likes you because you're impressed (look impressed and say things like "Good Job!"), you get to talk to the parents, the parents also get to talk to someone more grown up than the kids. Okay scratch the last point. They get the privilege of feeding you.
Posted by BagelHot at 6:30 PM

Sorry you felt that we dumped the kids on you. They like you a lot. And remember you've been in their life since they were born, so you're very familiar to them.