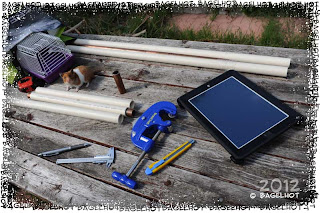 Outside in the backyard working on a small project.

I woke up pretty late today.  I stayed up late last night to finish watching Community season two.  (Note: for people wanting to watch this show - It wasn't until the second half of the season that it picked up.  I thought the first season was written better overall.)

Anyhooo...  I ended up going outside today.  It turns out there's a backyard at my place that has a picnic table.  I figured while I was outside getting some sun, fresh air and some pipe cutting done that I'd take the hamster (Captain Hill) outside as well.  She's been in her cage, indoors, pretty much all week. 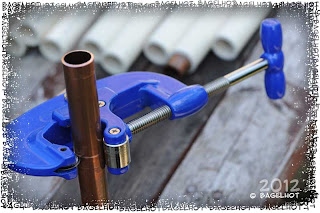 Cutting pipe with a pipe cutter.

We had about four hours before the sun started going down and the backyard was in the shade.  It's starting to get wintery here at night.  Captain Hill crawled around the table for about an hour before attempting to "fall" off the table to the ground.  I caught her twice in mid air then decided to place her in "the ball" so she could crawl around on the ground without getting lost or eaten by the neighbourhood falcon or cat. 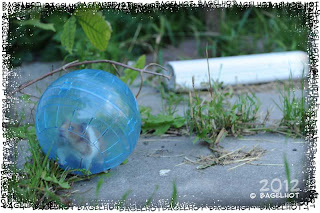 Captain Hill explores the back yard in "the Ball".

I realize it's been a while since doing a blog entry and this entry is not that exciting.  I've still got a whole bunch of entries from the past that have to be "posted".  Maybe I'll get around to doing that over the next few days.
Posted by BagelHot at 2:30 PM No comments: