Fit to a Tee 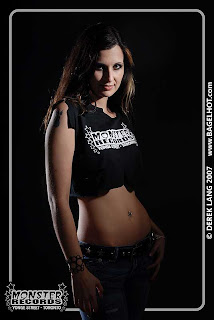 Today,with the help of Brigitte and Leanna, I managed to do a photo shoot for Monster Records. Specifically photos for T-shirts they are selling. This project was on the back burner for the last year. I'm reminded of this as it was during last year at Wakestock I found a potential model but had so much trouble with her modelling agency. They wouldn't give me a rate card or a solid answer on how much it would be to hire her. During the first phone call it was $50 an hour. By the third photo call it was just over $3000 for an 8 hour day plus licensing fees every year to pay for the pictures I would be taking. WTF!

The photos should start appearing on the new and improved Monster Records site in the merchandise section soon.
Posted by BagelHot at 2:00 PM 1 comment:

A strange thing has been happening to me in the last few weeks. I've been getting comments from people (who know me) that are along the lines of "Are you losing weight?", "You seem thinner." This wouldn't be so strange if I was actually actively trying to lose weight but I'm not. So the question that comes to mind is what is prompting these observations?

Am I wearing darker clothing thus giving me the illusion of thinness? Are my clothes stretching? Is my body evaporating or wasting away into nothingness? Are people just being nice to me for some unknown reason?

My diet hasn't changed that I know of I still eat the same crap in the same amounts that I've always eaten. Some things that are good for me and some things, like the odd McMuffin with all it's glorious trans fats, that are bad. Mmmm... trans fats.

Exercise? Haven't joined a gym or gone on some major bike ride. In fact I feel more inactive now then I did two months ago. Not to say I'm a couch potato. I still walk around a bit but I'm not doing anything that seems out of the ordinary (like bench pressing 500 pounds, or even 5 grams). My camera bag is the same size so it's not like I'm lugging more equipment around. It's all very odd.

There's a girl (who will remain nameless) who remarked on my losing weight a few days ago. Of course I just marked that up to "Wow, she's really being nice" (because she is) but then the next day when I went to put on some jeans I noticed... "Hey, these pants actually seem big." The expansion of the pants in the wash idea went away when I threw on the belt and noticed the extra two notches I had to pull to make sure the pants didn't fall down.

Okay, It's official I'm getting thinner.
Posted by BagelHot at 1:53 AM 2 comments: