A panoramic photo of the neighbourhood block

At 8pm a bunch of us around the world decided that we would turn off all our lights for one hour. To quote the Google web page, "On this day, cities around the world, including Copenhagen, Chicago, Melbourne, Dubai, and Tel Aviv, will hold events to acknowledge their commitment to energy conservation.". On a smaller scale we, the few of us in our neighbourhood, turned off the lights and walked out on to the street to see A) who was observing Earth Hour, B) who was not at home with the lights off, C) who was fast asleep with lights off, D) the stars in the sky.

The block was, for the most part, pretty dark with the exception of the actual street lights and one or two houses. We joked about showing up at the doors of the lit up houses with baseball bats, and pitch forks, maybe a torch or two. But then not everyone has heard of earth hour and some people may have forgotten. I didn't remember what day it was until I did a google search and noticed that the web site was black. "Why is it black? Oh yeah, Earth hour." 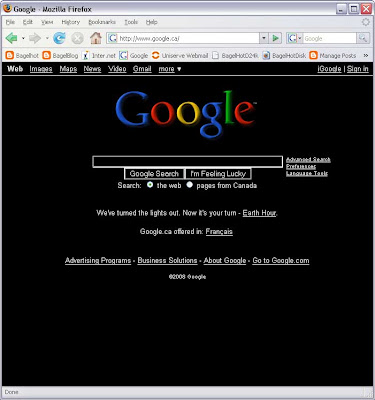 I had strategically put my computers on a 30 minute render. Yes my computer were on but the lights in the room were off. Hey, it wasn't like I was drying my hair for an hour with a hair dryer. A sad truth that making money comes before the planet.

It's interesting to note that while I was shooting the 24 photos to take the 360 degree stitched panoramic photo the cat known as Pumpkin sat on the road and didn't move. Almost as if he was trained to pose for a panoramic photo shoot.
Posted by BagelHot at 8:00 PM No comments: 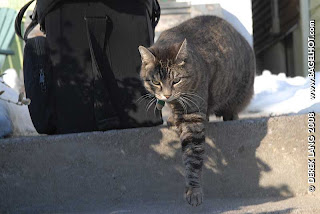 "Don't walk toward me I'm tyring to take your photo."

This morning I had made the connection that if looking at a cat and bending toward the ground or squatting, a familiar cat will generally start walking toward you. Most likely because it thinks it's going to be fed or petted.

It's because of this that taking a photograph of Pumpkin becomes a challenge. I was off to return some gear I rented back to Vistek and waiting for a taxi (that never showed up). I had let the cat out and saw Pumpkin walk around the front bush. I followed down the steps and looked around. The cat had pulled a Houdini on me. Then just like magic he was sitting next to the pile of camera gear when I turned around. As soon as I started to crouch down to his eye level he started walking toward me. So much for the cat guarding the camera gear photo.

I watched the cat wonder around the street. He crossed over to Andrew's house and then back to my side of the street when he sat looking at some house. I went tot he ground to shoot him down the street at worm level at again he came toward me. The shot I got was kind of funny though. It looks like he's out of shape panting with his tongue out. 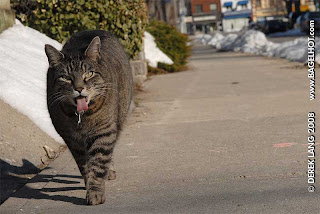 Pumpkin getting tired of walking toward me everytime I try to take his photo.
Posted by BagelHot at 9:10 AM No comments: 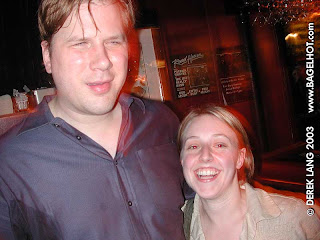 While I never knew Jeff Healey personally, I did get to meet him once. Natasha, my room mate at the time, wanted to see him play at Healey's (Jeff's bar located on Bathurst and Queen). I remember it being a smoky crowded basement, with a low ceiling. As we wondered through the crowd Natasha exclaimed "Look, It's Jeff!!". Jeff had just finished a set and was talking to someone in the corner.

Natasha wanted to get a picture taken with him but was too nervous to go up and meet the "famous musician". I told her she could walk up beside him and I'd snap a photo and he wouldn't even notice (after all he is blind you know). The sneaky photo while possibly funny seemed wrong. In the end I went up to him and asked him out right. He was more than happy to have his picture taken with a shy intimidated fan.

Since then there have been numerous times I could have met him again but the way things worked out I never did and now he's gone. I'm glad I met him once.

Below are photos I took that day of Jeff and his band playing. Enjoy the photos. Remember Jeff and his music. 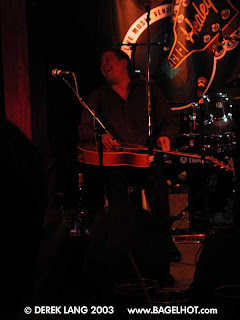 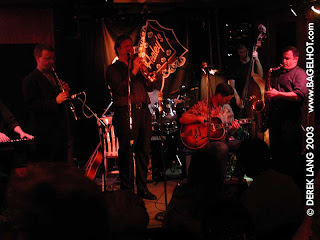 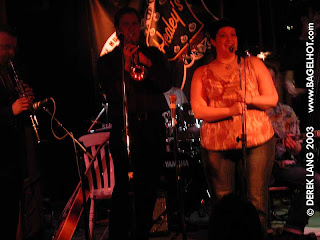 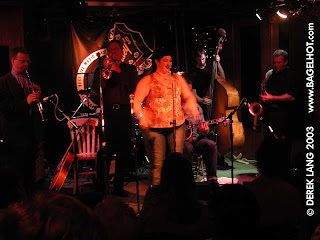