Back to the Future

Well, I haven't really been doing much these days.  Partially burned out from working Suicide Squad and perhaps liking sleep a bit too much.  About three weeks ago I got invited to a Back to the Future meet up to see the first two movies.  The person that created the event then changed the date to the 25th to see all three movies.
Having already bought two tickets and feeling to lazy to see if I could get my money back, I bought the three tickets for the 25th and decided to go see the first two movies as originally planned...  Today.
When seeing movies, especially a double feature, it's better to go with another person or a group.   The reason is that someone can hold your seat while you get food between movies.  I went to get popcorn missing the credits of the first movie only to find my center seat had been taken and I had to sit in the front corner, possibly the worse place in the theatre to sit.
Overall it was a fun time.  Because the theatre was packed with fans, people cheered in the audience.  Cheering at the opening credits, at seeing the clock displaying today's date, George punching Biff, during the line "Roads? Where we're going we don't need roads!", the end credit roll.  It was like seeing a movie back in the eighties.
Some people were even in costume.  One guy dressed as Marty McFly from 2015 had the jacket, hat, the sneakers that self laced (also with LEDs) and was even carrying a hoverboard.
I'm glad I went out. 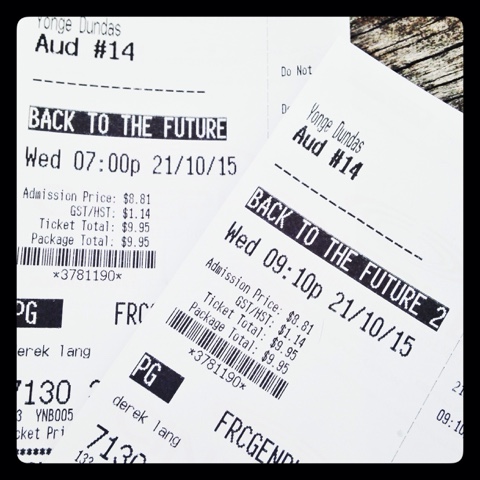 Posted by BagelHot at 2:23 AM No comments: