My sister at Swatow 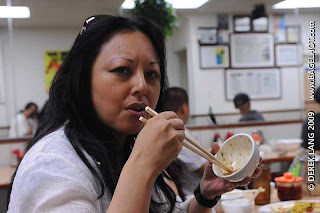 Still running on the same sleep schedule I woke up pretty late, around 11pm. Not feeling like cooking anything I decided to take a trip downtown and visit Swatow. It's been a while since going there.

The waiter said I was late and that my sister was waiting at a table. I didn't clue in right away. I was still a bit groggy. Turns out Jane Juk was there with some theatre people. I'm not sure when or for how long this has been going on but for some reason the restaurant crew think Jane and I are sister and brother of one another.

By the way I ordered the usual 111a, better known as the shrimp and lobster sauce on rice. 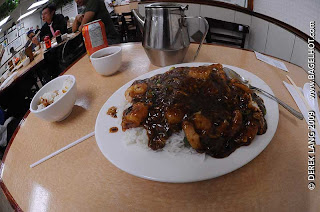 Shrimp and lobster sauce on rice (menu item 111A)
Posted by BagelHot at 1:30 AM