Taste of the soggy Danforth 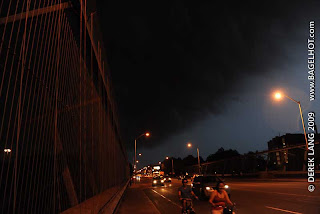 After seeing G.I. Joe at the silver city theatre up on Yonge and Eglington, I, for some reason decided to walk home. All together it took 3 hours which included stopping at a new pita place for a chicken shawarma. The weather was great until I got to the Bloor viaduct.

As I walked along the bridge you could see the black clouds rolling in. They were accompanied by strong gusts of wind, some light drizzle, lightning and thunder. 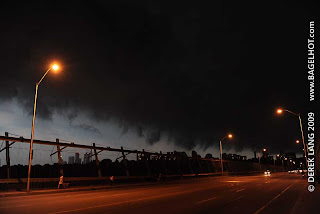 Looking back west the clouds are moving fast 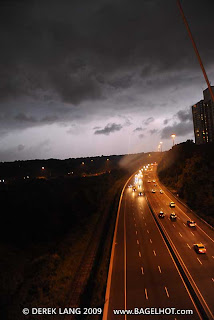 lightning in the distance 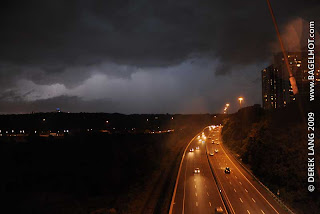 The street lamps at Broadview holding the "Taste of the Danforth" banner were shaking from being blown by the wind. Seconds later, the rain came down... in buckets. KaBoom! People were running away off the street trying to take shelter. It was like a bomb went off in the distance.

Within seconds I was soaked from head to feet. The rain had penetrated my shoes making it feel like I was stepping on wet sponges. It didn't matter if I stepped in a puddle two centimeters or two feet I could couldn't get any more wet. 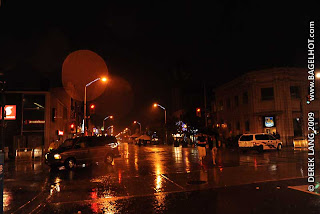 Soaked people on the Danforth wait under building entrances

I pulled out the rain cover on my camera case and kept walking. I had the luxury of being about 15 to 20 minutes until I got home. A nice dry place with big fat towels. Along the way I stopped at an ice cream truck. I think I spooked the driver. He was reading the newspaper and probably wasn't expecting anyone to knock on his window let alone order an ice cream cone.

He didn't open the window, just shooed me away. Probably didn't want the rain to get in and get him wet. Boo. I got home sans ice cream.
Posted by BagelHot at 10:07 PM