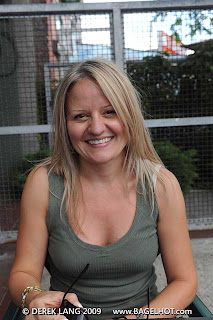 This is Lisa. I've known her since way back while taking applied computer science. We first met, really met, when she went to punch a guy named Andrew in the gut. Only he wasn't there. I was. I dropped like a sack of potatoes. We've been friends ever since.

Lisa is getting married on the 15th of august of this year. It's too bad I didn't know about this back in April/May when the roller derby schedule came out. I could have gone. The wedding conflicts with Hammer City's first WFTDA game against Montreal. The first All-Canadian WFTDA bout ever.

And so I spent today with Lisa enjoying lunch in lieu of going to her wedding. We ended up at the vegetarian restaurant King's Cafe on Augusta.
Posted by BagelHot at 1:30 PM