United we stand... and wait 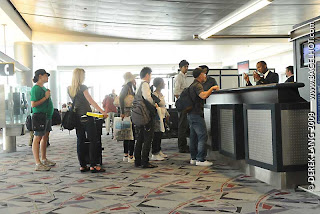 The line up for San Francisco.

The trip back started off pretty underwhelming. Starting with an surprise $50 charge for my luggage (that should have already been paid for) , $20 for the first piece and $30 for the second. What the heck? My flight via air canada covered the luggage costs. I had checked in advance. But no, the machine giving out my United airlines boarding pass wasn't letting me get my ticket without paying again for the luggage. To make sure I tried going through the automated teller's interface twice. Ugh.

I arrived at gate D52, I was tired, hungry, and less then happy. Looking over at the counter I noticed the time. It was 08:25, I was over two hours early for my flight. At the desk there was a line of people, two of them from RollerCon, one of them was S.O.

She was supposed to get on the 08:33 plane to San Francisco but was waiting behind some other people at the desk. While she and her friend waited I watched the clock slowly click over to 08:33. The flight status sign changed over from "ON TIME" to "DEPARTED". They did not board the plane.

As someone that just popped in as an observer you might think this was an isolated incident with two women who were consumed playing the slots. Maybe they didn't hear the boarding call because they were surrounded by the loud slot machines or were consumed by gambling? Your perspective changes slightly when you find out that not only did they not get on the plane but a total of 25 people missed their flight, that same flight, for the same reason. Now you wonder if United actually made a boarding announcement at all.

SO and the other 24 passengers had to fly stand by. Meaning they had to wait for the next few planes to fly them to their destination. Of course that also meant missing connecting flights and having to wait for those all well. It's irritating to think that by getting to the airport early, hours early, that something like this could happen. Having the flight staff blame the situation on you, the passenger, didn't help.

With that knowledge in mind I set my watch and went off to get food. There was no way I was going to rely on non-existent announcements or the non-caring flight staff to board my plane. 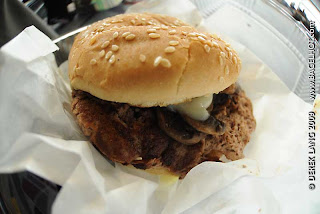 I ended up going to Ruby's Diner, a fancy 50s diner looking burger establishment. There really wasn't much choice in the matter. Much like most airports, once you're near the gate you're departing from you're boxed in to a certain area. Depending on your luck you can have good food or not so good food.

As it turned out, I had lucked out. Ruby's was a nice bright environment. I sat down at the counter while waiting for my food order. The employees were quite entertaining to watch. The banter between one of the cooks and a waitress had a bunch of us waiting customers laughing. One customer said "Just propose to her already". I received my burger and left before finding out the outcome. 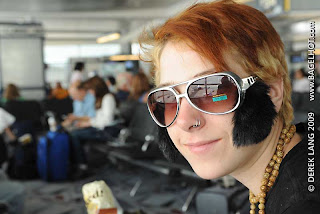 Beats per minute, with her Elvis glasses and chops

I got back to Gate 52 to see Beats per minute and the two skaters that were waiting on standby. Originally I wanted to fly through San Francisco instead of LAX. Mainly because of the sushi restaurant that was located there. Unfortunately when I booked, going through LAX was the only option left. 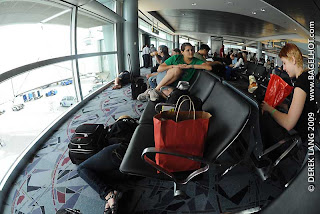 Waiting for the next flight

While talking to B.P.M. I noticed a bunch of people lining up at my departure gate. I didn't hear anything. No announcement, nothing. The announcer for gate D53 was audible but nothing for gate D52. I looked over and noticed the desk guy at D52 blabbing into a mic but I wasn't hearing anything.

I said good bye and lined up asking if the plane was boarding. They said yes and that they announced the boarding call a few minutes ago. I told them that I didn't hear anything and that they should check their speaker system because gate D53 was coming in loud and clear. Their response was pretty lack luster. "Well, we made the announcement." I was going to try to verbally pound the fact that the speaker system should be checked but was too tired. I just wanted to go home. I got on the flight and slept all the way to LAX. 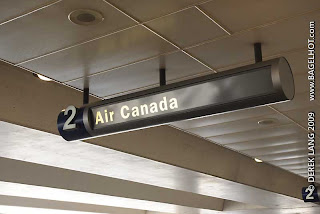 The 2 on the sign means you're standing in Terminal 2.

If ever there was an airport that needed better signage it would be LAX. In my limited traveling it's got the second worse signage only to Vancouver. I suppose it depends on where you're travelling and to be fair Vancouver was undergoing construction for the upcoming Olympics.

TRAVEL TIP
The tags (stickers) you get for your baggage tell you where the baggage is going. If you have a non-direct flight check these stickers. They will tell you if you have to pick up your baggage or if the airport personal will unload and reload them onto your other plane at the airport(s) along your journey.

I was not aware of this. Going to Portland from Toronto, after landing in Vancouver, I had to grab my luggage and recheck them. International flights can be a bit tricky as there's customs that you have to deal with as well.

I found out about the tags by talking to the United baggage help desk lady after exploring around the airport a while. Did I say signage was a problem? I stumbled onto the United airlines help desk by accident, the only person that was there was another passenger that needed help. She had been at the desk long enough to determine that no one was working there.

From there I made my way to the baggage carousel just in case my baggage was waiting for me. It was next to there that I found the United baggage help desk and there a very curt, pissed off woman. I don't think she wanted to be there. It's possible that answering mundane questions from clueless travellers was getting to her.

By contrast the help desk guy was quite helpful and pleasant. He had a map to show where we were and told me quite clearly how to get to terminal 2. Looking at the map everything seemed so easy. Maybe that's why they have maps of different airports in your flight magazine.

I memorized the map then went off to terminal 2. With a little help from a guy asking for spare change I managed to find terminal 2. Again, clear signage would be nice. Getting to the terminal was no problem but I was trying to figure a way to get in. All the doors were only opening up from the inside. A guy eating lunch helped me out. A small nondescript elevator took me up a level to the departure area. The doors opened from the outside.

It was there that I found the air canada desk. I wonder if I was exuding a being lost look? The air canada personal were quite nice. It was such a difference from the United airlines people. They looked at my board pass and printed me a new one then another person ushered me toward the boarding gate entrance.

It should be noted that it really doesn't take much to make a person's trip a great one. The person travelling is usually tired or confused. It's a new place for them generally. There's different customs, signage, dealing with people, etc. What may seem obvious to a person that works somewhere every day may not be that obvious to a new person that's travelling. Listening to questions and giving answers to those questions no matter how obvious the answers may be really does help. The Air Canada people really made my day. I was actually in a better mood. 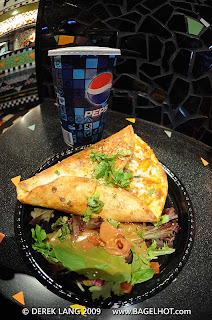 I was also starving. Again, not a whole lot to choose from. I ended up going to Wolfgang Puck and getting an oven roasted chicken, mushroom and onion melt ($11.30). From there a wait at the departure gate for two and a half hours. 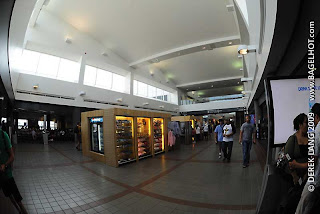 As I went to sit down someone shouted "RollerCon!". I looked over to see sone girls from Calgary that wanted to go to RollerCon but went to L.A. instead. They were just boarding their flight and I had just enough time to take their photo (see below) and give them my card. 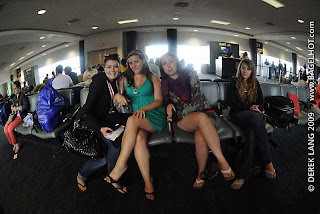 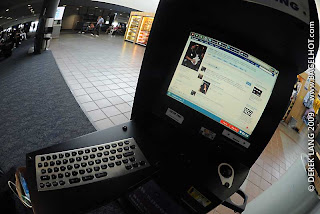 Killing time on the internet.

The Air Canada flight was great. I slept the entire way back, waking up for the odd snack or glass of water. While waiting for the luggage to show up at the luggage claim area I bumped into Bill, the director of Foolproof, turns out we were on the same flight. I hadn't seen him since the making of foolproof (six years ago).

We talked for a bit, Bill had just finished making a Western, the same one he was talking about making six years ago. I was glad to see he was still working on films. I really liked Foolproof and really wanted it to do well at the box office. It didn't. It's disheartening when good people put time and effort into a something that turns out great but it fails. That's the film biz for you.

Insert plug for Bill's next movie Gunless. I'm going to go see it.
Posted by BagelHot at 8:25 AM

Once again I am S.O. sorry for being very bitchy that day! It was the heat or UNITED screw them. Oh we got home only 14 hours and $250+ later.