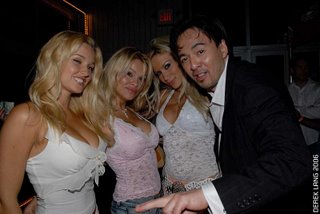 Saturday and I found myself back at the Docks. This time it was for Bill's birthday. Bill, a guy I met through Simon (photographer to the stars), ordered me to drop by for his birthday. He said that if I didn't have any fun he would pay me $100 in cash.

It was an odd offer and granted I think he was a bit drunk at the time but I was in birthday mode and wanted to go anyway. The weekend was jammed with birthdays with Leanna, Bill, Emmanuel, Kyoko and Michi's birthday all within a four day span. Non-stop socializing and entertainment not to mention a whack of picture taking. 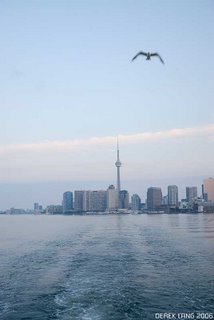 Boating away from the city

Bill's party started around 10pm at the Docks where he had a area set aside just for the party. After a bunch of eating, drinking, dancing and socializing the party moved to Jeff's boat and putting around the Toronto Islands. 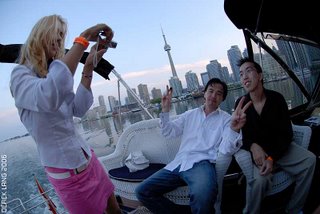 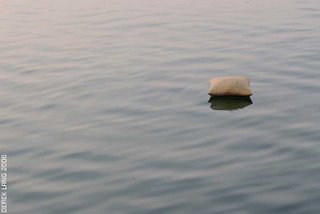 At one point someone sitting on the bow (front of the boat) knocked over a pillow into the lake. It took a few minutes to notify the captain and have a course heading change for a pillow intercept course. Eventually the pillow was pulled out of the lake with a fishing net.

We all sat on the boat watching the sun come up over the city. It was almost 7am when unloaded at the Docks and made our way to Mars Food for breakfast.
Posted by BagelHot at 11:58 PM