Tuesday Afternoon at the Movies 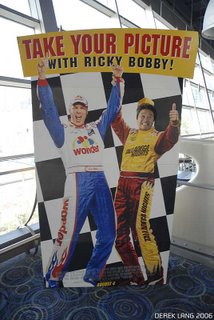 Emmanuel poses with "Will" at the Paramount

Today being a tuesday, the day that movies can be seen for half price, at least they used to be, Emmanuel and I went to the Paramount to take in a second viewing of Superman Returns. This time it was at the IMAX theatre in 3D! Woo hoo!

For those that don't know or haven't been reading that far back on my blog I have this fascination for 3D. So much so that I have a Realist 35mm stereo camera and a another blog that is dedicated to stereoscopic images in anaglyph format (the format that requires you to wear red blue glasses).

To my disappointment the movie was not entirely in 3D just four scenes. I felt that was kind of a rip off, having to be told in the movie when to put on and take off the polarized glasses.

Scenes that were in 3D

After the movie we noticed this giant movie poster with a hole for someone's head to stick through. Since I was the one with the camera it was obvious who had to stick their head through the hole.
Posted by BagelHot at 12:00 PM

Argh! You spoiled it! Now I know Superman is going to save people and fly around! Oh well, that's some money saved...

That's what you call a "glory hole"