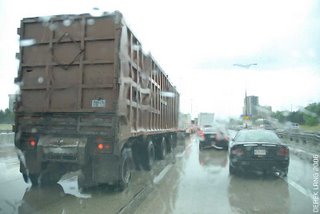 Today I managed to get work on a show called the "State Within". The job consisted of taking out cable work from the ceiling of a corporate type office while main unit shot on the other side of the building. The other part of the job was to transport stuff back and forth from set.

It was during the transporting of goods that I found myself smack dab in a crawling highway lane. The van I was driving was stationary for over 10 minutes. Having nothing to do but watch to see if the traffic would crawl ahead I decided it was a good time to take the camera out.

It wasn't until getting off the 401 that I noticed two trucks had collided into one another. Later on on the way home we passed by a car that had spun out taking a turn. It's raining... Slow down people! sheesh.
Posted by BagelHot at 1:17 PM