Photo day on the Island 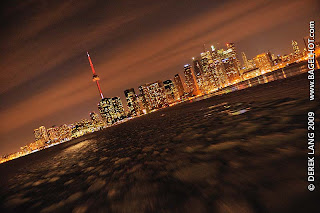 The Toronto skyline during the icy winter month of February

The first day of february which also happened to be Super Bowl Sunday was the day we went off to the Island as part of a photo meet up group. The time to meet 10:15am. The ferry to the island was at 10:30am and every hour after that.

Paul and I were the only two that showed up. Probably for three reasons. It was early (especially for a sunday), possibly the superbowl, and it's winter. Not a lot of people may think going to a frozen snow covered island for a few hours would be fun. Photography equipment gets cold, batteries don't work as well, a chance the shutter will be affected, might fall into water. Who goes out in conditions like these? It seems only two of us.

As it turned out, the weather was actually quite warm (at least while the sun was up). Once the sun went down my boots froze from all the water the leather absorbed during the day walking through puddles and knee deep snow. During the day the sky was clear and cloudless sometimes giving harsh shadows but otherwise mae for a great photo day.

I shot in the range of about 800 photos ranging for kids playing ice hockey on the lake, to a bunch of ducks being herded by geese, to th toronto skyline. Throw in some miscellaneous nature shots and ice formations and you've probably got our day covered.

We stayed on the island shooting until just after the sun went down (at 6pm) and after that walked swiftly back toward Ward's island to catch the hourly ferry. Once the sun went down ice formed along the road back. Think of march of the penguins but instead replace the cute penguins with two guys and a bunch of camera gear wobbling in the dark towards the ferry dock.

Thankfully a guy who walked by us earlier told the guys on the ferry to wait up for us for an extra minute. We heard the horn toot a few times and a voice coming from the boat saying to "Hurry up.". For the last few meters it was a mad dash across ice hoping gear didn't spill out of the bags. We made it.

The photo above was taken on the way back sailing through the ice towards the downtown core.
Posted by BagelHot at 6:45 PM

I was going to go actually, but it was the day before the start of second semester, I don't own boots, and I already arranged for a buddy of mine to come over and watch "King of Kong: A fistful of quarters."