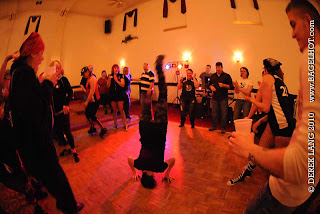 Fort Wayne aka Fort Fun. After the double header of bouts the after party was at the Thirsty Camel, strategically located three blocks away from our hotel. When we arrived the two top floor rooms were already packed with derby girls. One room had food and drink, the other larger room had the dance floor.

It didn't take long for the HCRG girls to join the party, once beered up, Carla Coma started doing head stands on the dance floor. This pretty much kicked off the rest of the HCRG joining in. Human pyramids, arm wrestling, dancing and crazy hijinks were to follow. 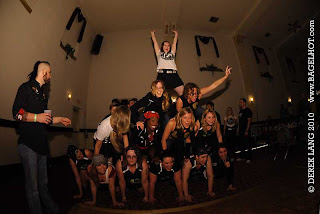 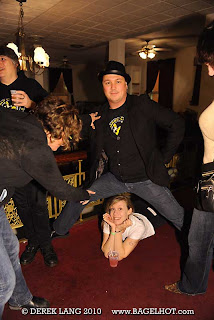 The "leg spreader" was a drink that was being served at the bar. Judge Jody came up with this pose getting the new HCRG bench manager Spencer to spread his legs. I laugh every time I see this photo and I'll always remember the drink name. 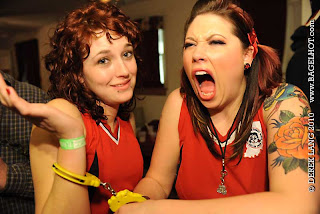 At one point the girls from the HCRG and Fort Wayne managed to get the local police officer to stand in and pose in some photos. He even hand cuffed some of the derby girls for photo taken. As he was such a good sport, he is not shown here as we would like him to keep his job.
Posted by BagelHot at 11:00 AM