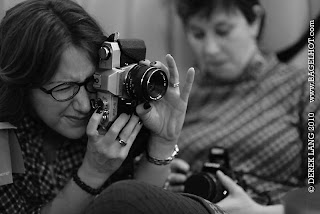 Lizzie and Georgette fiddling with cameras

There was a FlickR meet up at the Rivoli tonight. A bunch of camera geeks... er... enthusiasts met up to exchange camera stories, notes, and apparently eat. It was determined on the internet group that new comers bring baked goods.

I'm not sure where that came from but being that this was my first meeting in a long time I stopped by the Chinese bakery and brought a bunch of custard and pork buns (custard bun, pork bun, separate, not a custard pork bun).

They went over pretty well. Squeaky Rat brought in some homemade pickles that were flavoured with cherry and grape kool aid.

I tried the cherry flavoured one. It wasn't bad. I tasted like a pickle.
Posted by BagelHot at 8:00 PM