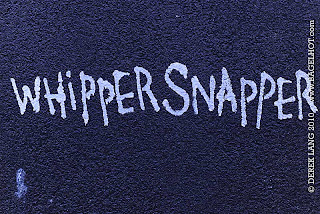 While the computer was rendering I went outside to see the world, so to speak. Sometimes you've got to put fire under your bottom to get out there and see things. It's easy to get stuck in a warm comfy environment when it's cold outside.

Down the street I had missed some large emergency. Four fire trucks, one with a ladder, a bus ambulance, a regular ambulance, two police cars. You could smell the smoke but looking at the houses whatever fire was there had been extinguished. I missed the action by a few minutes judging by all the fire personal who were making their was back to their trucks.

With all the commotion the only thing that really stuck out was the words "Whipper Snapper" painted on the side of a building. Reading those words I imagine some old guy on top of a box shaking his angry fist at kids going by on skateboards, the snotty nose brats are wearing baseball hats backwards and maybe chewing gum.

My paternal grandfather used to say "Instant stuff, that will kill you.". I'm not sure what he was talking about. This was before microwaves. It might have had something to do with those new fangled TV remote controls that were attached to a TV via a wire. There was a rocker switch that doubled the functionality of the 20 odd buttons. Wooo. For us, the future of cable had arrived. No more turning a broken TV knob with a wrench. Push of a button. Presto chango.

I remember how my uncles would say that as kids we always had it so good. We didn't have to walk X miles through snow to school. Heck, we had school. I pictured them as old geezers blabbing about their oh so distant past. "Back in my day...", add on whatever. "Pens? We had ink wells! We had to pluck chickens for our pens and Wow, they could run!". "TV? We had to entertain ourselves by playing with left over rifles and bayonets from the war". My uncle actually used to do this. At least until his friend, little Timmy started bleeding.

Oh yeah we had it so good. I remember sharpening that Popsicle stick on the sidewalk, collecting bottle caps, the odd 30 cent comic, 10 cent bag of potato chips, 20 cent hamburger at McDonalds.

How does this affect me? Quick cutting, crappy movie sequences, bad music mash ups, that cater to the attention lacking, littering, little turds.

Wow, I'm THAT guy shaking his fist at those punks, those brats, those whipper snappers.
Posted by BagelHot at 4:07 AM