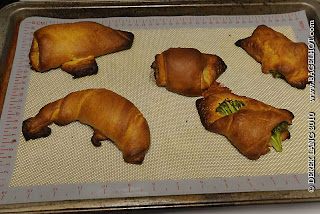 Not having sex, wearing the same underwear (unwashed), not shaving, owning a lucky penny, having a loonie embedded under the ice, sitting in a specific position on a couch, these might all be things one does in order to win an upcoming game. They're nutty superstitions that may not do anything but to some may affect the outcome of play. To a player it might just be that small detail to give them the edge (in their mind anyway). The result, they play better.

I don't really believe in that kind of thing. Granted, wearing old underwear might make the other team back off a little because you really stink. It's one thing if you're on a team playing the game, but as a spectator? Cheering for your team might help if you're right there at the game. What if you're watching it on TV? Players can't hear you in another province. (I'm sorry to break this to my friends out there, yes Zee, your shouting at the TV won't make your team win)

A few days ago, while watching the Canada versus Solvakia game on TV, my friends noticed that all three goals scored by Canada occurred while I was downstairs baking a pizza. Solvakia scored their two goals while I was sitting in front of the TV.

Today, with nothing really better to do I watched the big hockey game. Canada versus the USA. I'm not a sports fan, unless you include roller derby. Correction, I'm not a sports nut. If Canada or the US won I'd be okay with that. I have friends in both countries. Why should some friends be "losers" while the others are "winners", it's beyond me. Watch the sport to see good hockey.

If the Leafs win or lose, no matter, as I type this I can hear Zee yelling at me for why they haven't won the Stanley Cup since he was born. I'm one of those people that will watch the odd game here and there socially.

When Team Canada went into defencive mode and started to let goals in and then go into overtime I realized that I wasn't baking anything. There was nothing in the oven. So during the start of the forth period I threw in some croissant rolls. The Pillsbury kind where you don't have to prep anything.

I kind of forgot that they were in the oven until Canada scored the winning goal. Which is why they're so brown to the point they're almost burnt. Oh yeah, that's why Canada won, it's because I made half burnt croissants. Zee, you can thank me later.
Posted by BagelHot at 3:00 PM

You better be baking during the Leafs remaining games this season starting tonight.

If it works you're baking on 82 different nights starting next October.