Fort Wayne, Indiana. For some it's a city in the middle of nowhere (I use the term quite loosely since everywhere is in the middle of somewhere), for the Hammer City Roller Girls (and this photographer) it's a city of fun, fun, FUN. This is entirely due to the Fort Wayne Derby Girls being such great hosts. The 2008 Fall Brawl was over a year ago and the the last time the HCRG had a visit.

Past events involving Fort Wayne have taken on legendary, even epic, levels of story telling. The Fort Wayne bed taco, the floating furniture, the hotel hallway tackle. Yep, a bit crazy and none of these stories involve Montreal. Montreal? what? To the non-derby readers out there, Montreal derby girls have this reputation of bringing the party with them. It's rare to see a party hit the party levels Montreal is capable of. That is unless you're travelling with Hammer City.

At the hotel we were staying at (see previous post for location) there was a free continental breakfast being served until 11:00am. Mainly comprised of cereal and toast. Not really much of a breakfast but for a mere $5.95 you could upgrade to the "hot breakfast" which offered an additional, almost unlimited supply of scrambled eggs, bacon, sausages, and small fried potato chunks. 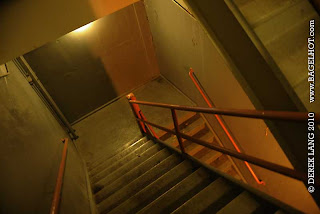 I would have liked to have stayed asleep but the thought of getting that breakfast made me crawl out of bed at 10:00. I made my way downstairs with sleep still crusting around my eyes. The elevator didn't come right away so I made my way down the stairs. I found that you couldn't exit on the main floor without tripping the fire alarm. So I had to walk back up to the third floor (the second floor was a door to the kitchen and was locked) then wait for the elevator. 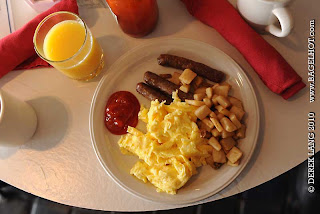 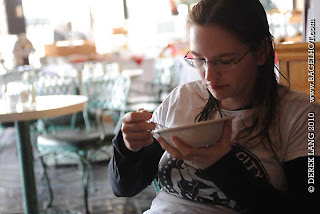 Is it me? or are all the freshmeat nameless until they have been drafted onto a team. The bunch of them that travelled to Fort Wayne were usually referred to as 'fresh meat', a single unit. Other than the 'fresh meat' calling each other by name, no one else seemed to. 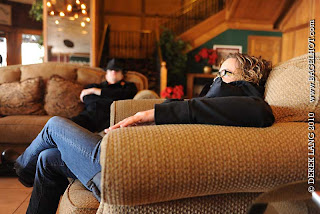 As Lock is absorbed into the lobby chair, Carl counts down to Scotty being late.

After a short trip to the local Walmart to get supplies we went back to our rooms where I napped. At 1:30 we were to meet back downstairs in the lobby and then as a group head towards the Allen County War Memorial Coliseum.

I found it a bit disconcerting that the Fort Wayne Derby Girls web page didn't have the address for the place. Even the web site of the actual coliseum didn't have the address at quick glance. I suppose everyone in the area knows where the War Memorial Coliseum is. As a visiting Canuck, I had to look it up on google. To make life easier for you the reader, if you're headed there or want to know where it is, the address is as follows and also included are the geeky GPS coordinates with a link to a Google map. 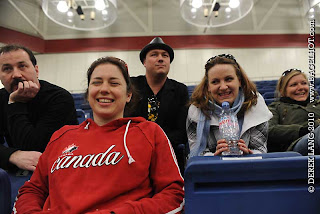 HCRG time on the track wasn't until 15:00, that gave us just over an hour to look around, get ready, meet some of the other players. 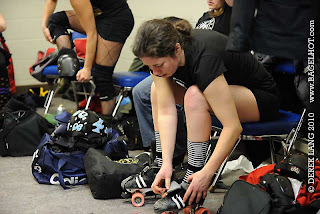 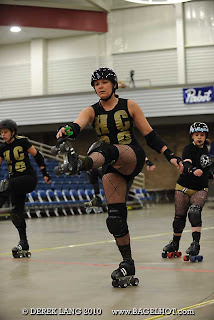 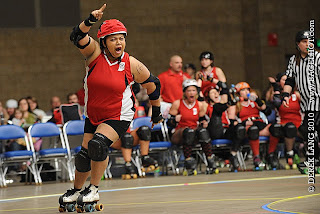 The first game, the Circle City socialites VS Fort Wayne's SWAT team ended with SWAT leading by only seven points (52 to 45). As for the Hammer City versus Bomb Squad, it was a larger spread (119 to 44 for the Bomb Squad). Ouch. 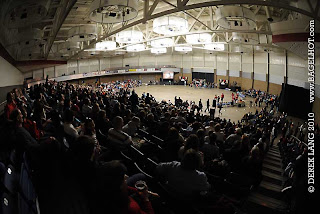 The awesome crowd of around 2000 people. 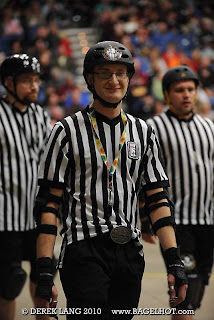 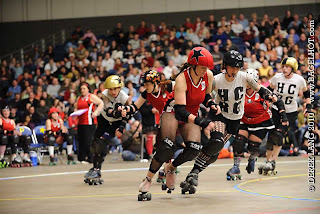 The Pink Painther (30) makes her way out of the pack becoming lead jammer for the Bomb Squad. 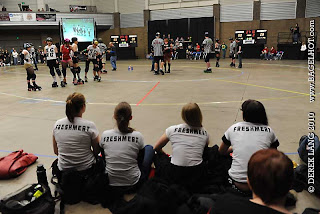 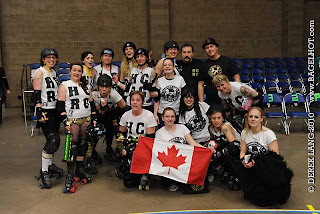 The Hammer City Roller Girls (with fresh meat)
Posted by BagelHot at 10:30 AM