Film: that other stuff for taking pictures 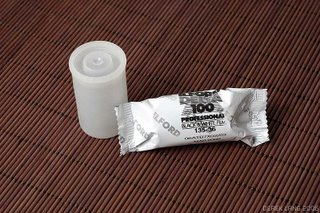 An old plastic fuji film container (left) next to a brand new package of film (right).

"What's with using film anyway?", you ask. Well it seems my realist camera had some film in it. I found this out a few days ago while doing the whole apartment cleaning thing. The film was from last may, I think, and wasn't all used up. I decided to shoot some stuff this weekend and thanks to seeing David Trattles' photo gallery I was inspired to go around shooting black and white photos once I went through the old color roll.

The realist is also a square-ish format as it shoots five p (sprocket holes) across the film as opposed to the standard eight. For some reason I like shooting with a square composition from time to time and since I don't own a medium format camera the realist is the next closest thing. Plus there's the whole 3D aspect. I'll post some images once I get the roll developed.
Posted by BagelHot at 11:56 PM

Yay, film! I roll my own, so it comes in a big metal tin.