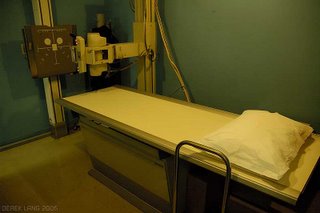 While visiting an X-ray lab. I noticed that A) the lab was in a basement, B) the basement was dimly lit, C) the Pillow on the X-ray table didn't look like it was ever used. I'm not really sure if there's any kind of relationship between these observations. They were just random observations.

For some of the readers that might be asking what I was doing in an X-ray lab my answer would be "I'm the sort that gets around". I was looking for some old X-rays taken of me a few years ago during a car crash on Laer's birthday. To keep the story short and simple a few years ago while Laer and I were in a taxi we got T-boned making a left turn by a trans am speeding through a red light. The trans am hit the door, the door hit laer, laer hit me, I hit the glass on the other door.

As a result, other than being in a daze and having a valid excuse for it, I got a bunch of X-rays to see if I was alright. Most of them being of my head. At the time I wanted to take the X-ray pictures home but the technician told me they had to be kept on file at the lab for X number of years. That was 7 years ago now.

Unfortunately I didn't go back sooner to get the pictures. I found out that after three or maybe even four years they recycle the photos to get the silver out and the photos are no more. D'oh!
Posted by BagelHot at 1:30 PM