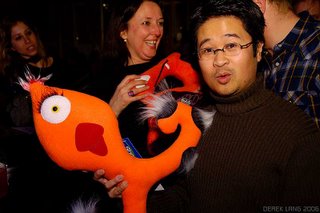 Thursday night. Juicy Stuff, the organization that brings you interesting, trendy news via the web, held a party on the second floor of Gabby's. Gabby's is a resturant located west of bathurst on the south side of Queen street. The party hilights included a tarot card reader, amazing fruit baskets, a hand masseuse, a cute bartender, some stuffed animals created by Geoffrey Davis, two very attractive PR women from Flip! and an assortment of very fun, nice interesting people.

All in all the party was great fun. It was a good pick me up as this week had started to take it's toll with the combination of job prospects going away and the whole funeral thing.
Posted by BagelHot at 9:00 PM