King City or there abouts 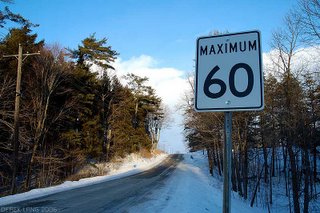 Looking down the road.

I was invited to visit the parents of some friends a few days ago but had to decline on the basis that I was A) taking someone out on a birthday lunch and B) had a photo shoot to do of a club opening later on in the evening. The photo shoot went away (see yesterdays blog entry) and the person I was supposed to take for lunch came down with food poisoning earlier on in the week.

I was looking forward to the lunch birthday for a couple of weeks as eating food with good company is always top on my list of things to do. After the lunch was cancelled and my schedule became wide open the visiting of the parents became a nice plan B. 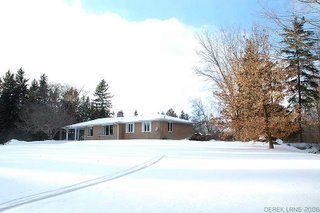 The parents place from the backyard.

Kyoko's mom had her birthday last week. This was the week that a bunch of us could get together and help celebrate. So up off to somewhere around King city we went. Kyoko and I drove up early to get the food cooking. Note: Kyoko did the cooking I went outside to stay out of the way. She was under a lot of stress with prepping the meal for her mom and worried that Chris would get into an accident. Chris biked up, in the cold, against the wind. It took him 2 and a half hours to pedel up there. Pretty good as it took us about 45 minutes up the highway by car.

Despite the temperature being -10 C, the hike outside around the backyard was nice. The air crisp, clean, and undisturbed snow that had a thin frozen sheet of ice covering it. I noticed some rabbit tracks but didn't see any animals. 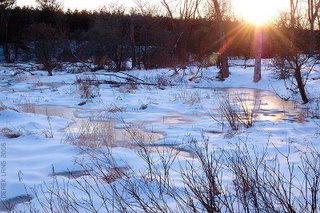 I did find the stream in the backyard. It was by accident as I stepped on a snow bank and fell through to the water. Luckily the stream was shallow and my boot was water proof. There was a frozen shell of ice around my boot by the time I got back to the parents house.

Dinner consisted of a succulent pork roast and some tiramisu. The visit was cut short when the neighborhood lost power. It was in the middle of watching the documentary "March of the Penguins". I arrived home at about 11:30pm. Just in time to go check out the club.
Posted by BagelHot at 3:00 PM