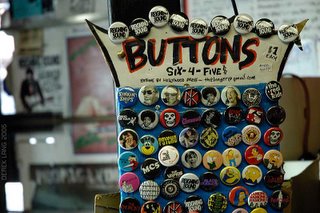 The button rack at "Reigning Sound"

Hamilton, known for it's steel work, polution and the Tiger Cats among other things is also the spawning ground for a bunch of my cousins. For some reason, perhaps like salmon swimming back to mate, I decided to venture to Hamilton. Not to get any readers hopes up. I did not mate, find a mate, or even a potential mate.

I did find a store called Reigning Sound. Well actually I was driven there by Craig, Leah's boyfriend and the guy that picked me up from the bus station. Like a Cygnus getting sucked into the black hole we made a bee line right for the store. Craig being brain washed by the store's owner, Jim, bought a bunch of stuff including a B-movie where a doctor saws a persons head. The sales pitch was great. "Hey Craig", Jim says while waving the VHS tape in the air, "In this movie a guys gets his head sawed."

It was like watching the Jedi mind trick in real life. 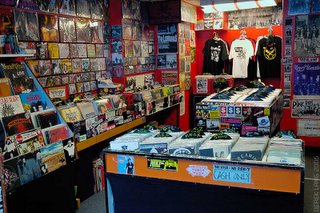 The store itself was a visual overload. I could spend hours in there shooting various knick knacks. Record covers, bumper stickers, a guitar signed by Joey Ramone, and everything in between. Eventually with Craig and his armload of stuff we left the store and proceeded to the house where Leah and the dog, Nanook, were watching the Olympics.

I watched the speed skating with Leah while Craig and his brother fixed the bathroom sink. There was a black goo pouring out with something that had clogged the drain. I didn't really pay much attention to what was going on as my eyes were glued to the TV set. It's been a while since I've watched live TV. I've been watching LOST and HUNTER on DVD these last few days so I haven't seen a commercial in eons it seems.

The commercials were peppered with the odd feel good Olympic themed commercial. The grandfather and the dad seeing the Dad's son play hockey. Dad finds out that the grandfather used to watch him play hockey as a kid and the grandfather even carries a picture of the Dad when he was a kid. Touching stuff for a Tim Hortin's commercial. Then there's the Petro-Can gas commerical where Olympic athletes thank the average joe for helping him or her get to the games by buying gas. I can feel a tear coming out of my eye just thinking about that great heart string pulling writing. Geez, I could write stuff like that. 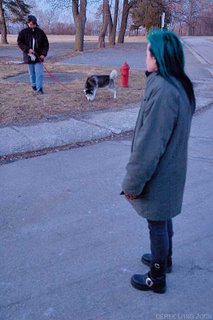 Once the sink was fixed we decided to take the dog out for a walk. The walk had a duel purpose. Exercise the dog and allow me to take pictures. I didn't really take that many pictures as it seemed really, really, really, cold. The sun was going down and I didn't really want to stick around to set up the tripod to shoot anything. The tripod felt like a metal pipe on a cold day. I could feel it freezing my back and shoulder through my coat.

Once back at the nice warm house, Leah made some soft shelled taco food. We ate that and finished the night off by watching WEW (Women of Extreme Wrestling) and some weird Japanese womens wrestling on the FIGHT network. Some of the japanese women were wearing bug masks or school girl outfits. It was really bizzare.
Posted by BagelHot at 3:00 PM

come out and visit again when it's warmer. I like going for walks when you take pictures.