No it's not a extra large hole at the bottom of the sea. It's the 40th superbowl with the teams Seattle and Pittsburg playing against each other for the title. Sports, at least watching sports on TV, really doesn't interest me. I find watching people watching these events is more interesting. With the superhbowl or any other game finals for that matter the fans are usually more on edge and as a result more interesting to observe. There are of course the commercials which I find great for production value. These things put together aren't really enough to get me out of the apartment but throw in a Bikini competition and, well, that's another story.

My friend Simon managed to get free tickets to go to the superbowl party at the docks. Surrounded by big screens, large masses of people (of both sexes), beer, food, and the odd beer girl, well there was probably going to be some kind of photo opportunity. And since it was sunday there really wasn't much to do anyhow. 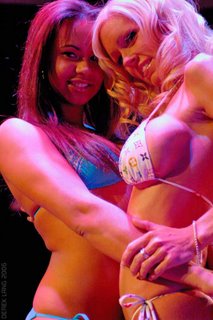 Two contestants in the Superbowl half time bikini contest.

I decided to shoot without a flash and just shoot with existing lighting. Most of the photos came out okay but needed a little bit of color tweaking. Using the Nikon Capture software which for the most part has been collecting dust except for converting RAW files to jpegs I actually got some pretty good results playing around with the D-lighting option. It brings out details where the image is normally black. The more I use the software the more I'm beginning to like it. It is a bit weird at times though.
Posted by BagelHot at 12:03 AM