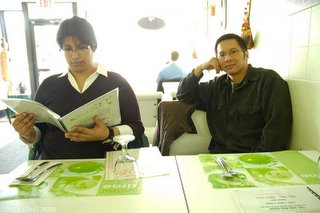 Michelle and Ian at the "new" Thai place.

After the funeral services for Zee's dad, Michelle and I decided to walk home. We did the trek the day before after the viewing and it only took about an hour and a bit. On the way home we bumped into Ian, followed him to to the local video store, then to the local Starbuck's where we sat and chatted for what seemed like a few hours. Really a few hours, upon which we were offered free samples ranging from cookies to crusty bread with cheese.

I had gotten a lemon muffin and a peach juice and after eating still felt ravenous. After all I only had half a veal sandwich which I crammed into me before the funeral just before 10am. That was only three hours ago. Ian suggested a Thai place that had just opened up located just south of St. Clair on Vaughan road.