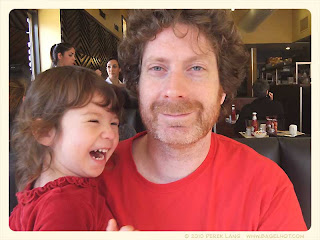 It's been a while seen I last saw Thomas. It's been like almost two years, over two years (now that I look at the last blog entry - Wow, time flies). We met up for breakfast at Boom, a breakfasty egg place up on St. Clair. This was something nice to do before joining back up with the other shrimp1 in the photo pit at fashion week. 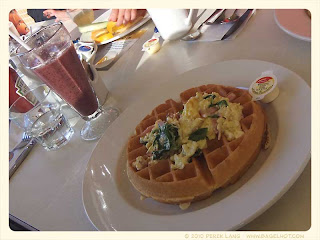 My eggs on a waffle

While the food was good, the service bordered on slow. We tried to get a table out of the direct sunlight so Freya wouldn't burn but letting a server know this was our intention proved difficult. It was like they were hovering around all the tables except ours. Getting their attention let alone telling them we wanted move wasn't possible.

Eventually we just moved on our own when a table freed up. We got that angry look of daggers from one of the servers but at this point we didn't care. We were still waiting for menus. shessh.

Overall it was a good experience (once we got our food). Thomas and I did a bit of catching up and then eventually left the restaurant thinking how short of a visit it seemed.


1 "Shrimp" - an affectionate term I use for the photographers in the photo pit as there's no space and you're squashed down into a hunched position that resembles a shrimp.
Posted by BagelHot at 10:00 AM