It was a mixture of excitement of seeing the new Canadian designer's collections this year and the feeling of disappointment at what the FDCC1 would have in store for us for the $100 entrance fee. Even before the week began I was looking at the separate $60 fee for the charity event. That would be a $160 total for FAB to shell out for me to cover the whole event.

Translated that would be $100 Canadian more than what the BFC used to charge for Fashion Week in London. Who knows maybe photographing London costs more now (It used to be 30 quid). At any rate I've always thought the Toronto fees were high even if it was the magazine picking up the tab.

Some people are giddy when they get a swag bag. It's usually filled with hair products, shaving supples and the odd drink and or snack. Personally I'm partial to the food items. The previous seasons under the Fashion Week tent showed no signs of food (unless you count the odd chocolate bar donated by Nestle). Personally I'd rather use the $100 to buy subway sandwiches all week.

While Toronto fashion week just spans afternoons/evenings there's still the hours of prepping, getting stuff working, editing and delivery of photos over the course of the week. One gets hungry. Hungry enough to even risk the wrath of Robin Kay.

The first day comprised of two catwalks in the main building. An assortment of outfits of various designers from Holt Renfrew, and a collection from Bustle. A bunch of regular designers that usually show at fashion week were absent this season. They showed in Montreal or just had a catwalk last week avoiding the FDCC altogether. 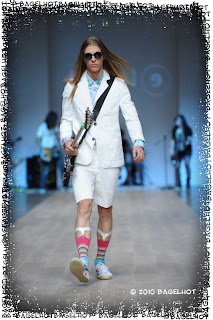 Bustle Rocks and Rolls this season

The Bustle collection made my fashion editor weep for joy. It's times like this where I wish FAB had a larger budget and we could run photos of every outfit that showed on the catwalk. 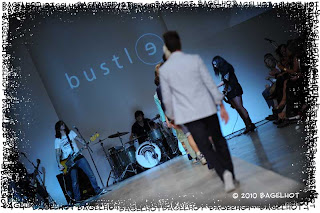 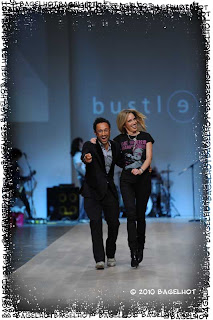 It's always stumped me as to who the Fashion Week here in Toronto is put on for. It's really late in the buying season, London was over a month ago. Are there buyers that go to this event here in Toronto? 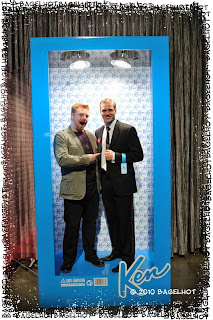 
1 Fashion Design Council of Canada
Posted by BagelHot at 7:00 PM