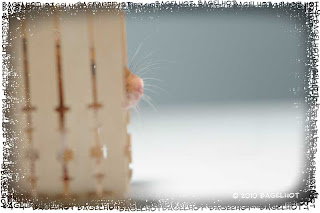 According to the hamster book1 hamsters feel more safe when surrounded by wall or solid objects. Kind of like the mob boss with his back to the wall facing the entrance of a restaurant.

To test this theory I built a box out of popsicle sticks (bought at the local dollar store with precut notches in them). I placed it on the table and watched the Captain's actions. For the most part the hamster ignored the box unless I placed her on it. I even tempted the rodent with peanuts. Nope. A hamster unmotivated by food seems weird to me.

Once I started photographing with the strobes the hamster, when put into the box, stayed in the box. As hamsters are not a fan of direct light I figured the strobe would have been equivalent to lightning going off some place. Some place close above the poor rodent's head. 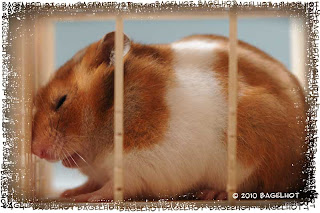 Attempting to shoot fast and get it over with I noticed the hamster started to relax and start eating. It looked like a prisoner behind bars playing a harmonica. When finished I placed the hamster back in it's habitrail pod with an assortment of food (including the single left over cricket). 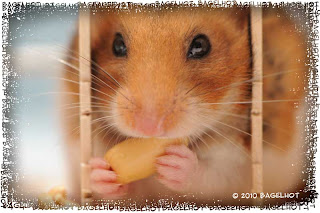 "Nobody knows the trouble I've seen..." 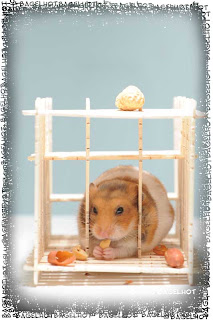 The popsicle box (with stairs) 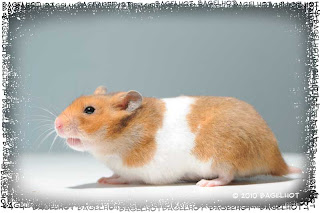 Where did the box go? 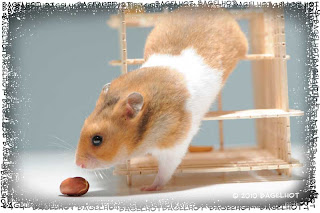 Climbing down to a peanut?

1 "Hamsters" by Peter Fritzsche
Posted by BagelHot at 9:00 PM

You couldn't eat that many popsicles, in the name of science?