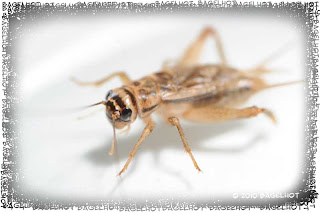 The book1 says that hamsters need protein. Up until reading this fact I always thought hamsters were vegetarian. There were two live options that were recommended, meal worms and crickets. Other options were to feed the hamster cooked chicken, dog food, or hamburger. Pork is too fatty. I didn't want to put food in the cage that might end of rotting if neglected so I went with the live food option. Plus it might give Captain Hill more exercise while at the same time keeping the hamster from getting bored.

I'm not a fan of seeing meal worms crawling around. While they might be quieter than a bunch of crickets I wasn't even sure Captain Hill would eat either of them. I ended up talking to the guy at the pet store about storing and feeding the meal of the hamster. The guy at the pet store seemed over enthusiastic when finding out that there was a customer that wanted to feed his hamster live food. It kind of weirded me out a little. Aren't there others that feed hamsters this stuff? "No, everyone else pretty much feeds the hamsters pellets. You actually want to take care of your pet's needs." Huh... I felt like a proud pet owner at that point. Responsible and caring and all that good stuff. In the end I went with two crickets. I figured I'd let them go if they were not appetizing. 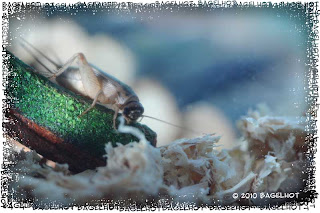 In the Hamster pod

Up until now Captain Hill hasn't really had any other live things around other than the other hamsters in the cage when I bought her. She's still skittish around me even if I'm holding food. I placed the two crickets in the blue pod and waited.

It should be known that the connection to the blue pod was put together by me in such a way that the crickets wouldn't be able to get to the rest of the habitrail, only the hamster would have all access. I figured I'd do that in case the hamster got freaked out and needed to escape where it was cricket free.

It didn't take long. Captain Hill headed toward the blue pod and ran into one of the crickets. I never saw a hamster jump straight up into the air before, almost hitting the roof of the pod. The hamster ran off back into the safety of the orange pod (with the hamster wheel).

It wasn't until the next morning I noticed one of the crickets was gone. I'm guessing it was eaten as getting out of the pods would be difficult. Unless the cricket manged to escape to another section of the habitrail and hide... no, it was eaten.

1 "Hamsters" by Peter Fritzsche
Posted by BagelHot at 2:00 PM