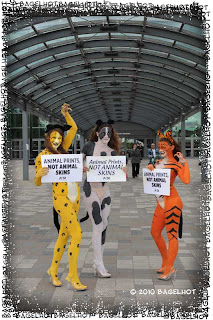 For me, Fashion Week day two started off by seeing three girls dressed in cat suits. They were Peta people. At this point I wondered if any of the designers were using fur. I couldn't think of anything made for the spring summer season collections but maybe some jacket had a button made out of elephant ivory.

As large as Toronto Fashion week is to the people in Toronto it is still quite small on a global scale. The first year photographing in London I'm reminded of a reporter from the Netherlands. "Toronto? As in Toronto, Canada? Has a fashion week? How cute." Yes, despite what we may think of ourselves we are but small potatoes in the grand (fashion) scheme of things. Milan; Paris; London; the big three, then some where down the scale is New York, and even further way, way, way down the scale is Toronto.

I suppose a way to know how big any fashion week is would be the number of magazines and media that cover the event. Sure we get coverage of selected designers in the local papers but do newspapers like the New York Times or the London Times see photos from Toronto? How about the newspapers in Wilkes-Barre, PA or Paris, Texas?

One of the things I noticed this year and generally every year at Toronto Fashion Week is the lighting compared to other catwalks. London in particular as I've shot there, but even if you look at photos from Paris or Milan, check out the model's eyes.

The angle of light is steeper here and perhaps because the catwalk is an off white this season results in dark eye sockets. Check out London. You'll notice that the models photographed in the London main tent have evenly lit faces, even Jenny Packham's line looks good; darker eyes perhaps but it's a glossy black floor! Toronto resembles the lighting of the Blue Bird venue.

Here are some photos from the various catwalks today. Notice the dark eyes. 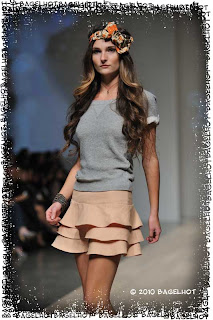 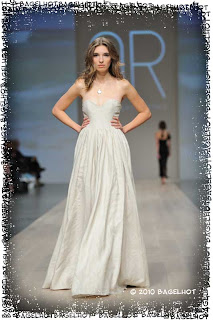 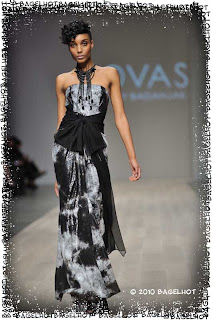 As a photographer in the pit there's not a lot you can do to alleviate this. 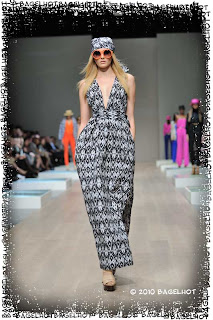 Props to the Pink Tartan collection for putting sunglasses on most of the models. While this doesn't change the lighting it does hide the eyes and lack of lighting in that area. Plus it is a spring summer collection and what says summer in a non-sunny environment more than sun glasses.
Posted by BagelHot at 3:00 PM