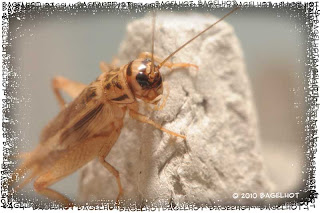 With one of the original two crickets gone and because I can't get enough of the chirping from the single cricket (sarcasm) I went to the pet store to buy another seven. Making the total known cricket population in my apartment an even eight. Four would stay in the pod available for Captain Hill to munch on (I'm still wondering if the hamster even likes them as food). The other four are being kept in a small rectangular box with some food and a part of an egg container. 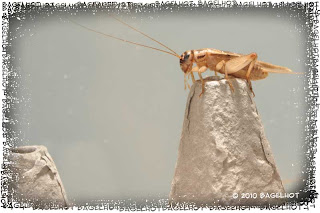 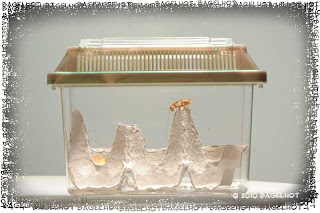 I'm not really sure why I did this. Partially it would be to clean the cage easier; I wouldn't have to round all the crickets up, partially so the hamster doesn't feel surrounded by insects, and partially so the hamster doesn't stuff herself with protein and get fat all at once; should she go on a hunting binge. There's also the stereo effect of the crickets chirping with the two groups in different places.

I've haven't really gotten used to the noise they make, it sounds like a hard drive failing, but it's not loud. I can sleep no problem.

Doing some online research I have found out some interesting cricket facts...

As a test I tried using the Bug zapper app on the iPhone. It's supposed to get rid of mosquitoes using a high pitch frequency. While I've never had mosquitoes in a jar to actually test this application I now had four crickets to see if it worked.

I'm not sure what the sound does. Is it equivalent to making the ears bleed? Is it the sound that a predator might make? Does it mess up the insect's nervous system? In the end the app didn't seem to do anything. The first try all the crickets went quiet. The second try nothing. Perhaps they just wanted to hear the iPhone unobstructed the first time.

It's a free download so test it out for yourself if you want to and get back to me. I'd be interested in seeing if it actually works with mosquitoes or anything for that matter. 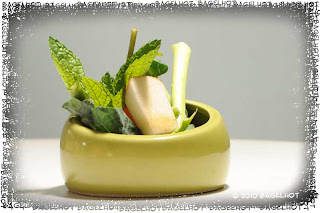 Plan B: Salad bowl for the hamster

As a plan B, should the hamster feel more vegetarian I made a small bowl, large for a single hamster, of various fruits and vegetables. Broccoli, apple, mint, sprouts, carrot pieces, and a string bean.

Captain Hill ignored the crickets and went for the salad bowl in the end.
Posted by BagelHot at 2:00 PM

The bug zapper app does nothing, like most iPhone apps. :-P

Also try the Captain on meal worms (you can grow your own and they're quiet) or smaller crickets.