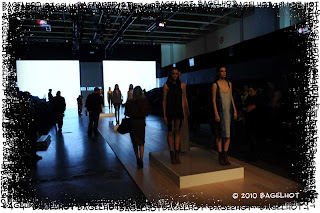 If you have been photographing the 'studio' environment at Toronto Fashion week these last couple of days you would think "Wow, what crappy, uneven lighting". That is, you would think this until experiencing the full on awesomeness of the Rita Liefhebber collection in the 'marquee'. After that you would be thankful that the sun was mixing with the tungsten lights in the 'studio' environment of the fashion venue. At least you could see something. For the Liefhebber collection some mastermind at LG Fashion week brought lighting to a whole new level, a whole new level of "SH*T". 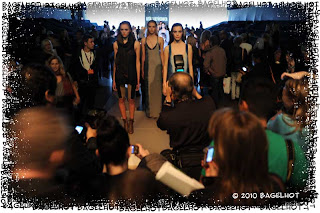 The lights go up to reveal... "Really? This is the lighting?"

As a catwalk photographer, as opposed to an event photographer, I get paid for the number of photos I can sell. It's important to make that distinction. Photos that I sell are ones where you can see the clothing. Arsty fartsy photos with mixed lighting or lack of lighting do not sell. Who wants to see a white wedding dress, for example, looking yellow, blue, or a mixture of both? Throw a person in between the model and my camera just makes things more difficult. Obstruction of an outfit is even a harder sell. No sales means no coverage. Is this what the designer is after?

Before getting crazy angry at this I have to remind myself that perhaps the designer wants to give the people at fashion week an experience. Kind of like going to the ballet or a play. Dramatic lighting, different colors, I've seen collections at fashion week done like this before. Heck, I've even photographed models around a fire pit at fashion week like there was a sacrifice going on. It's true I'll remember the event and even the designer. Unfortunately the horrific lighting supersedes the memory of the actual clothing. In today's case I might wonder if the experience is supposed to resemble the lighting of the Chilean miners trapped in the mine shaft.

It's one thing to be creative and light your models differently but it's another to surprise your photographers. The FDCC had a policy this year where the photographers, once in the media lounge, were not allowed into the viewing area until the rest of media (writers, and other non camera people) could go in. This meant that the photographers would have to figure things out, like camera settings and positioning, on the fly.

As there's only brief descriptions of what's going on from other photographers and video operators that didn't leave the area one can only do so much. There was no announcement that lights would eventually turn on or what color temperature or intensity they would be. I was standing in the dark for five minutes looking at non moving models. They could have been mannequins at this point, zombie tranced, lifeless mannequins. Fed up, I was on my way out of the room when George (the main FDCC photographer) yelled to the lighting tech "Is this the lighting?". The lighting tech replied "It'll change."

Had I not heard this I would have just walked out right then and there. It was like being in the Royal Ontario Museum bat cave. All you needed were the sounds of dripping water and bat chirps to make you feel at home.

Turn on a freaking light! 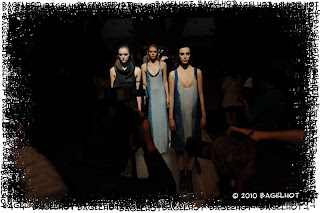 When the lights did come up I was behind a bunch of other photographers, took a photo (to document the crappiness), and walked out. By this point I was fed up at the stupidness and organization of the whole thing. It really wasn't worth my time to be there.
Posted by BagelHot at 4:24 PM

Thanks for making light of a bad situation. :-)