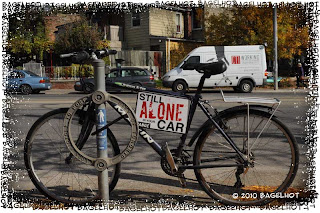 There's that song that's sung by Petula Clark about going downtown when you're bored or maybe to lift your spirits, but what do you do if you already live downtown? For me it was just getting out and walking around a few blocks, snapping some photos, and returning home. 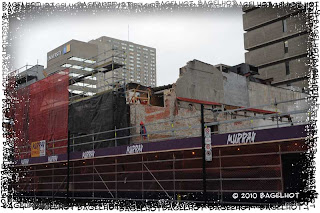 The Sam the record man building being torn down

It's always sad to see a Toronto landmark (at least in my mind) go away. The memories of lining up at boxing day for that 99 cent Duran Duran LP (yes, 33 1/3 inch vinyl), or wading through a bunch of sound effects CDs on the second floor, the unlevelled flooring, the soundtrack section, all gone with a single demolition. 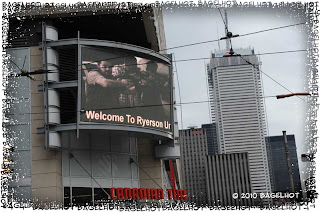 I looked up to see this billboard.

On the way back I saw this billboard. On the top portion there was this ad against drugs and gang violence. Just under the video was a scrolling bar of text welcoming Ryerson students back to school. It had to do a double take to make sure I saw this correctly. Then I waited for the text and the video loop to line up again so I could take the photo.
Posted by BagelHot at 1:00 PM