From the Garden to the Table 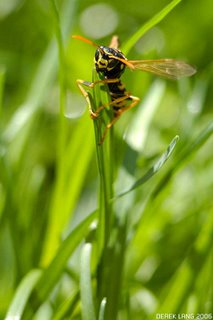 A wasp at the top of a grass blade.

I managed to procrastinate again from doing the taxes which are due at the end of the month. Instead I shot a backyard insect then went inside to shoot some building blocks for photographers direct (an online stock agency based in the U.K.). Someone on the site was looking for the letter 'P' and objects that contained them.

After shooting the 'P' blocks I decided that since I was all set up to shoot stuff anyway I'd shoot my pork chop dinner as well. Of course as it usually happens when I'm cooking a got a phone call. It was Juliet from Juicy Stuff. She wanted to brief me on tomorrows event. Luckily the pork chop has two sides. The face down side is, shall we say, a little crispy. 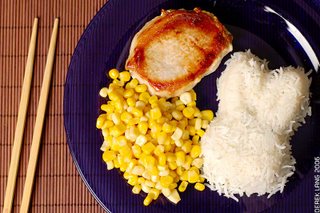 The cake mold I used to shape the rice had too much detail in it that didn't translate to the rice clump. You can't make out the bunny eyes, nose or mouth. I thought about putting a cherry half for the nose but that required me going out and buying a can of fruit cocktail. As this isn't a real photo shoot (and I was hungry) the bare rabbit had to do.

Note: I did not eat the food with the chopsticks. The chopsticks seemed to photgraph better with the brown place mat than the spork.
Posted by BagelHot at 11:15 PM

Nice Superfriends reference. Here's some trivia. Do you know who the Wonder Twins (and Gleek) replaced?

I'll log back in in a few days to give you the answer.

That's an easy one. In the original Superfriends cartoon, before the Wonder Twins and Gleek (the monkey), the teenagers that helped out the Justice League were Wendy, Marvin, and Wonder Dog.

You should look around for a similar utensil, the splade, which also has the serrated edge of a knife. We use them all the time.