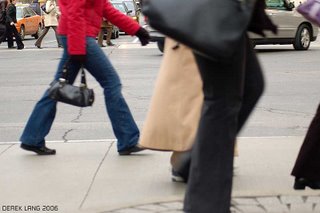 I managed to get some pretty good sleeping hours in last night. After delivering the work I'd been doing the last few days, the same work that's been keeping confined to the apartment, I got to sleep at a reasonable hour of 1am. About six and a half hours later I woke up trying to figure out what to do. The answer was obvious. Go outside and shoot something, anything.

A while back I grew fond of wondering around the downtown district watching people scurry around the work buildings with their cup of coffee, the newspaper, laptops, PDAs, cell phones, all trying to get from one place to another while I, not having to work could just sit back on a bench, sip a drink, eat a burger and appreciate having the time off. How very bohemian of me. It's been a while since I've had to work on regular clock type hours, even longer since those hours were only from nine to five.

This morning that's what I ended up doing. I left for downtown on the 7:15am streetcar, to avoid the mad rush downtown, but mainly because I was awake. I went to my favorite junk food morning breakfast chain for a sausage and egg McMuffin, then casually made my way down to the downtown core... Bay street, Union Station. It was about 8:30am by the time I started taking pictures of the drones getting themselves to work. Most of them on autopilot, coffee or briefcase in hand not really noticing anything except whatever was directly in front of them. 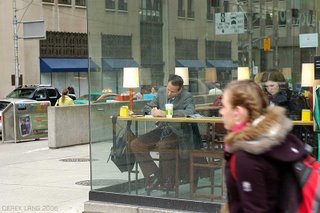 Working away in a coffee shop

I decided my theme for shooting would be street scenes. People going to work, people on the street working. The hot dog venders, the street people, bike couriers. Things that you might see on an early Toronto morning. I walked from Queen and Church (the McDonalds) to Yonge to Union station up Bay to the black TD buildings, through the PATH (under ground walkway) up to queen just south of the new city hall, up yonge to college, across college to Jarvis where I got on a streetcar and headed back home. By the time I got back home it was about 11:40am. 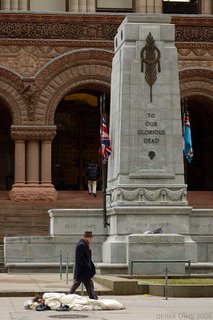 Freedom to sleep on cold cement
Posted by BagelHot at 7:15 AM