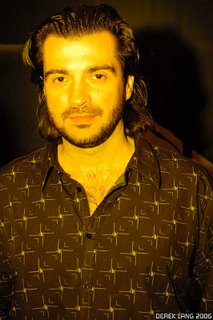 Tonight at Cache, a cool bar to hang out hidden in the King and Bathurst area, was a party for the "Stylist" modeling agency. My assignment, was to cover it for Juicy Stuff (the web site I've been getting work from recently- ed.). As I wasn't given a time to get to the bar I rushed there immediately after seeing the movie "The Sentinel" with my Dad.

The movie was not that great thanks to editing done by an advanced deficit disorder editor. The number of jump cuts in the first part of the movie seemed never ending. Hold the camera still for a moment. Can we hold on a scene without jumping back and forth? It was like watching a movie by moving a pair of bifocals in front of your eyes.

I arrived at Cache early. It was another hour and a half, around 10:30, when people started showing up. In among the crowd of dancing women and people smoking I bumped into Jason Davie. Jason is a film maker that I met at Darryl's HLAP party and as part of an improv troupe that my friend Bruce Simpson was in a few years ago. Turns out it's a small world.
Posted by BagelHot at 11:00 PM

Good to see you again...I am hopeing to bump into Bruce tonight at the Baddog. We are doing a midweek mayhem show. Thanks for the tip about the Sentinel, I was going to download it, but I guess its not worth my bandwidth. Peace from the Southeast...JD