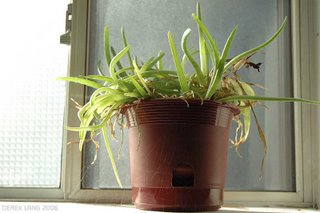 In my state of creative delirium, that usually occurs when I work a lot of hours with little sleep, my brain comes up with ideas. Ideas that could be taken as extremely brilliant or utterly stupid. I'll let you decide. Today's brilliant question is...

Can worms be pets?

To be specific the earthworm, not worms that you might find in your intestinal tract. Sure earth worms may not be very cuddly, or furry (or are they?). People have reptiles for pets. People have piranhas as pet fish. Some even have pet rocks. So why not a worm? You'd think it would be an ideal pet to have around as it's pretty low maintenance. Perfect for those animator types that put in long hours and might forget to take their shoes off to go to sleep let alone feed an animal.

Petting your worm could prove difficult as you'd have to dig for it if you let it live with your plants. But hey they do have ant farms. I wonder if there's a company that makes plexiglass worm farms? A couple of years ago I think season three or maybe four of Earth Final Conflict there was a glass container made for a set with scientists checking up on meal worms. I'm not sure if that was custom made or if there was an actual company that made it.

What end is what with a worm anyways? If you have more than one worm how do you tell them apart for naming purposes? How old do worms get? How fat do they get and how long do they grow? As this is the World Wide web, I poked around to find answers to these questions as well as a whole bunch of other useless facts that you can bring up at a party to seem mildly interesting.


For more information on worms check out the Squirmin' Hermin site.

An eco-store on Bloor sold special buckets'o'worms. They compost, and a friend says they do indeed make good pets. It's facinating to watch them mulch things. But not a pet if you're looking for action, beauty or cuddles. Look for the store on the North side of Bloor, somewhere just west of Spadina. I hope it's still there...

They're NEW!
They're EXCITING!
They're POSABLE!
They're ACTION worms!

This would be the new ad for selling pipe cleaners.

Speaking of which, does anyone remember that TV commerical with the worm that would go around pencils? In the end it was just a fuzzy worm on fishing string. What a lame toy.

Did you ever get the comics with ads on the back for wonderful Sea Monkeys? They looked so cool, like little monkey beings that lived underwater in castles. Once I was a grown up and had money to waste, I bought some. They are just brine shrimp. They have no fancy clothes on their bodies, or crowns on their head like princesses, and they look like shrimp, not monekys. So disappointing.

I actually bought a bunch of sea monkeys once. After a while I figured ,much like a fish aquarium, the sea monkey tank needed cleaning. I put the sea monkey water into a bowl and went over to the sink to clean the magnifying glass bubble container. When I went back to the bowl, the dog was drinking it. There wasn't much left.

Hahahahahaha!!!
I ended up feeding mine to my fish.

My cat drank my sea monkeys.

When I was a kid I bought the X-ray specs from the back of a comic. I think a lot of "lame" toys were made for us kids back then.

Oh... I just got the Frank Herbert Dune reference.

Ooooh, I so wanted those X Ray Specs! My mum wouldn't let me have them! In fact I only got the sea monkeys as an adult after I moved out of home. Hmm, should I admit to that?

We're all friends here. They have a corporate version of the sea monkeys where the sea monkey container is spray painted gold. There's also a Mars colony version.

My friend and I got Sea Monkeys around 1991... after always wanting them as a child. Didn't last long, though. We were captivated by the variety of additional products... like aqua mazes and basketball courts.

Aparently, light will cause Sea Monkeys to go into a 'gentle frenzy'.

We even made a brief documentary, documenting the arrival and preperation/feeding of the Sea Monkeys.

I was always curious about those X-Ray glasses... but even more so with the 'huge' set of WWII ships and airplanes, etc that you would see on the back of comics (which had a cool drawing of an attack on a shoreline, with lots of explosions and stuff).

I not only remember the 'worm that goes around a pencil', but I actually HAD one.... It's a soft, yellow 'pipecleaner-looking' thing with a snout, googley eyes and an invisible thread that you tied to your shirt button. Moving the pencil (or glass, or hand) away from you would make it look like it was moving.

I actually thought it was really cool... Wonder what happened to mine?...

er.. sorry I left that last comment about x ray specs while accidentally logged in as Uncaringbear (hubby). SO for those of you who were thinking he's a perv for wanting X Ray Specs, the perv was me. Speaking of pervs, Bagelhot, see how many comments you get on posts that AREN'T about half naked chicks?

Yes it seems that thinking back to childhood does trigger something in the readers to leave a response. That or talking about worms.

Just think if I did an entry on half-naked girls with worms!

And we have Sea Monkey Eggs, as yet unhatched, got 'em at xmas and waiting for just the right occasion - they don't just come with clothing - you have to make it for them out of little tiny bits of cloth!

Lame toys are still made for kids. Except Sock Monkeys - the best toy ever for a century! Everyone should have a Sock Monkey!